A most untimely upset stomach

On Saturday, Jordan was participating in a rowing competition fundraiser.  Different departments and community groups could put together teams and compete against one another with the help of our local university's rowing team.  We took the kids to see Daddy row.  I was nervous about it because I didn't know how hard it might be to manage all three kids myself, how crowded it might be, or how long Jordan would be busy, but we decided to take them and hope for the best.  Suzi took a pen and wrote "GO DADDY" on a piece of cardboard to use as a sign. 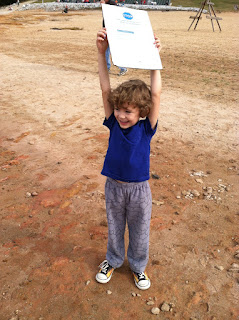 As I stood out at the lake with my girls happily finding rocks in the sand and Robert on my back in the Ergo, resting his head on my shoulder, I thought, this isn't bad at all.  It's a beautiful day and we are having a good time!  What was I so worried about? 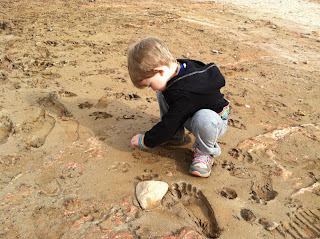 Not so fast, Jenny. 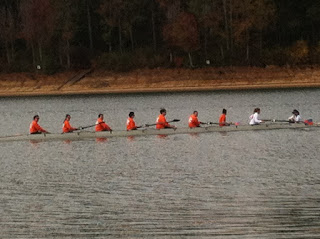 From the right, he's the second orange shirt.  Stayed out there about an hour.

As Jordan was out in the boat with his team practicing, I heard rumblings of regurgitation behind me.  I tried to get Robert off my back, but there was no time.  He'd had almost an entire pouch of berry applesauce, and he puked it all over the front of his outfit, down my back, into the Ergo, and into my hair.  I keep spare clothes for the kids in the van, but we'd taken a shuttle to the lake.  I had to take my shirt off and stand around in just my nursing tank top.  Since Robert's clothes were covered in puke, I asked Suzi to take her shirt off and zip her jacket up so Robert could borrow her shirt.  I had no way of wiping my back off.  None of the other spectators came to help me, but I didn't really blame them and was kind of glad.  I had to hold Robert for the rest of the time, had no Ergo to use, and Jordan was out in the boat with no phone so we couldn't even take the bus back to the van.  To top it off, some of Jordan's coworkers were there to witness our sticky situation.

Luckily Jordan was given a new t-shirt for participating, so I got to wear that home.  It was an extra large, but it covered the purple vomit nicely as we waited for the bus and then rode back to the van.  I was really happy to get in the shower, and the weekend only got better from there.  Also, it was only an isolated incident and not a stomach bug.  Thank God.

It's really hard sometimes to think of any good reason I should take the kids out in public by myself.
Posted by Jenny at 9:48 AM