Sunday, March 20, 2011 - 38 weeks 1 day
I am just so irritable today, for so many little reasons.
Yesterday was my Blessingway, which Megan and Jenn did for me, and it was wonderful. Jenn made amazing cupcakes and Megan did a special henna design on my belly, and my mom and mother-in-law came. Everyone brought me a bead for a birthing time bracelet, wrote down wishes for me and Robert for the birth, and we braided the baby an umbilical cord tie. It was really special and I feel lucky to have such good friends. I'll have to do another post about the Blessingway later. 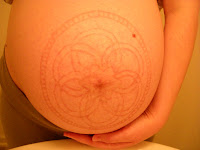 38 weeks, 3 days with henna by Megan
But.
My midwife came over before the Blessingway for a prenatal and the baby, who has been measuring on the small side of normal, is measuring small enough that perhaps we should check on him. It probably isn't a big deal because we don't normally have big babies, and I went past 41 weeks with the girls. He has time to grow. Yesterday he was in a weird, oblique position too, though. Instead of settling into a head-down position and staying there, he's been rolling all around. Carey is sending us for an ultrasound just to be sure everything is okay in there. We're going to call tomorrow and see if we can get a chiropractor appointment first.
I've been crawling around on my hands and knees, sitting on my birth ball, and doing pelvic rocks just trying to get him into a favorable position. Sometimes I'll feel like I've gotten him head-down again and as soon as I check, he twists out of my hands in whichever direction he wants to go. I don't know why.
The girls and I have a cold, which is annoying. I've been trying to avoid dairy and a couple of other things I love because of the cold. I stayed home with them today but Jordan went to church because we had children's church and he had a meeting afterwards. For some reason Ivey always waits to poop until her dad leaves, and she did that today. It was a really bad one to clean up too. And then the girls screeched and fought with each other and Jordan came home later than expected.
And then Jordan looked in the fridge and said, "oh, there's goat cheese!" and I snapped at him not to eat all my goat cheese, and then felt bad.
I told him "I am just so angry today!" And, really, it's not the best day. It feels like there's more I want to do than I can possibly get done before the birth, I'm getting a little OCD, and I am quite pregnant after all.
But on the way to buy some more goat cheese I realized, I am mostly just worried about Robert.
:-(
UPDATE! Tuesday, March 22, 2011
Yesterday I called the chiropractor and got an early appointment for an adjustment and the Webster technique. Just before we left, I called Carey and she had gotten me set up to go for the ultrasound in the afternoon. Dr. Wickiser adjusted several different things and explained that when the round ligament is too tight, it can make it so the baby has a hard time getting into position. That is probably why Robert was moving around so much--he was trying to go the right direction, but it just wasn't comfortable. By the time we arrived at my parents' house to drop the girls off before the ultrasound, I already felt different, like he was settling in. The chiropractor is awesome. I don't think I'll ever go through another pregnancy without chiropractic, especially not at the end. I'm going back a few more times before the birth (assuming Robert stays in for a couple more weeks).
The ultrasound couldn't have gone better. We only had to wait a few minutes and the first thing the tech told us was that Robert is head down. Yay! The chiropractor helped! He was moving, practicing his breathing, and appeared to be drinking amniotic fluid too. We got to watch him moving his lips and sticking his tongue out, which was really cute. As for his size, he is supposed to be about 6 pounds 7 ounces, give or take a pound, which is a fine size. His projected due date (although, really, dating is best done around 20 weeks) was April 11--the date I guessed as soon as I realized I was pregnant! Apparently I just like to take my time growing babies.
So everything is fine. The only unusual thing about the ultrasound is that the little boy had his feet crossed up by his head. I have no idea how he got them there but even the ultrasound tech thought it was pretty interesting. I know he isn't stuck that way because he has already been kicking me up high this morning, so I guess he was just showing off.
These are the happy days of pregnancy. We are all set for our waterbirth--the tub is set up, our supplies are packed away, and it could be anytime but probably, and I'm hoping, it will be a couple of weeks. After going to 41 weeks + 2 days twice so far, this time I won't feel late, I'll feel normal. Today I am going to try to get a little cleaning done and hopefully I won't be too tired to take Suzi to dance this afternoon.
Posted by Jenny at 9:39 AM

Your belly is beautiful and I'm glad everything is going well! What a relief!

I was wondering how things went. I should have called you Sun. I'm sorry. : ( I'm glad to hear you've had good news though. What a relief. I hope it's smooth sailing from here on out.

So glad everything worked out! Love the henna <3

Totally agree...I swear by the chiro when pregnant. She turned Junie with one treatment! So great for all around comfort too- it doesn't feel great at the time (when it comes to stretching that round ligament), but I always feel better afterward.

Your belly is GORGEOUS.

I'm so glad that you posted the update, and that things are all OK. It's a good thing you decided to see the chiropractor, first. Hooray for chiropractic!