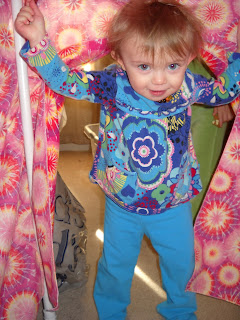 This project was inspired by Suzi. The other day we were going to the recycling center/dump, and the girls were already waiting in the car when I asked Jordan to grab the box that Suzi's new car seat had come in. The girls had been playing in it, but it was sort of torn up and wasn't big enough for the girls to share, and we just don't have the floor space to keep big boxes around our house indefinitely. Jordan picked the box up and headed for the door, and I mentioned that he might want to break it down in the house and then carry it to the van. He did not heed my sage advice. Suzi looked out her window and saw what he was doing and a tantrum of epic proportions ensued.
("MY BOX! MY BEAUTIFUL, BEAUTIFUL BOX!!! YOU BROKE IT!!! WAHHHHH!")
It was heartbreaking. This continued all the way to the dump and then some. So while I tried to comfort Suzi, I started to wonder why we couldn't have something better than a box for the kids to play in. Something easier and faster to put together than a camping tent. Something we could put up for playtime and take down when we needed the space, without hearts being broken. Something that could go inside or out, and wasn't too big or too small, and that they could eventually learn to put up on their own. I told Suzi we were going to make something cool.
We stopped by Lowe's and got ourselves some PVC pipes and joints. We were able to make ourselves a frame out of three 10' pieces. The connectors are 3-hole elbow pieces, but one hole is threaded so we had to buy pieces with one threaded and one non-threaded end to make them work. 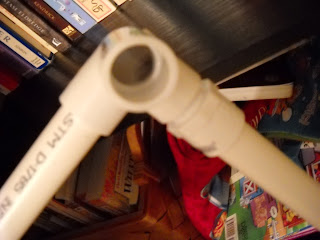 When we got home, I marked off the length I wanted and Jordan sawed the pipes into pieces. I can't remember the exact length of the pieces we cut (oops) but I will share the dimensions of the fabric. Here are Jordan and the girls playing in the frame. It was entertaining all by itself, apparently. 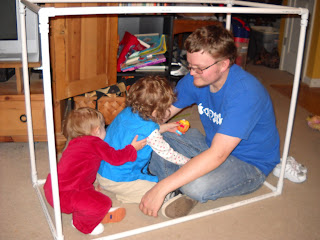 We had been given this bolt of fabric by someone who was cleaning out their supplies. I had no idea what I'd use it for but I knew I'd figure it out someday. It was perfect for a play tent! 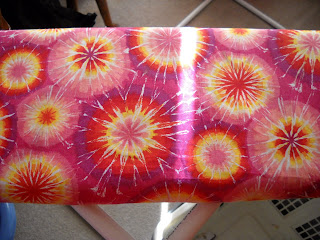 I cut five pieces--actually, I cut a little slit and tore most of it to be sure it would end up straight. My mom swears this is the easiest way to get a straight line on your fabric. There's the top (23.5" x 43"), the two small ends (23.5" x 35.5") and two pieces for the front and back (35.5" x 43"). I cut them larger than necessary because I didn't want the cover to be too hard to pull over the frame. I can't really describe how I got them all sewn together, but it probably wasn't the best way. I used my new serger so it would have neat seams on the inside and the work would go faster. It wasn't without mistakes, but I finally got it done, and once I did I spread it over the frame. I was so happy to see it actually fit! (Here is one mistake--I accidentally sewed the top piece to the side instead.) 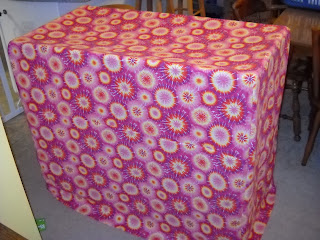 Then I cut a little slit in the middle bottom of one end, where Suzi said she wanted the door, and tore it straight up to a few inches from the top. 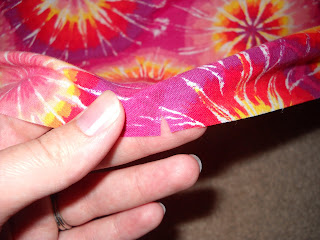 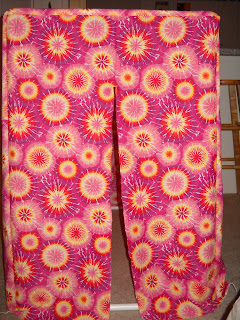 I switched my serger to rolled hem and went over the opening I'd torn and all around the bottom of the tent. It's amazing how fast I was able to hem such a large area! At this point all the tent needed was a little Fray Check applied to the thread ends. To make it easier I turned it inside out and placed it over the frame to apply the stuff. 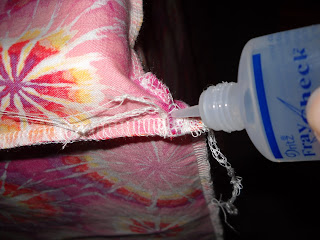 And now our tent (dog house, Suzi says) is ready to provide hours of open-ended fun, or a little shade! 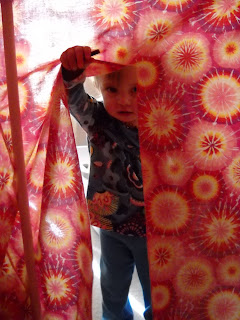 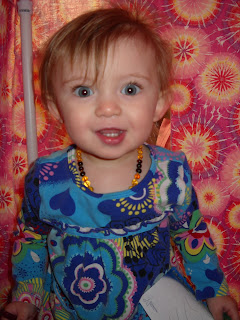 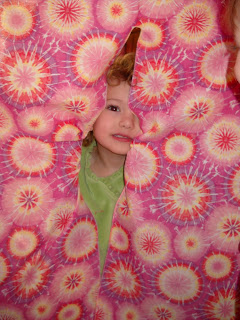 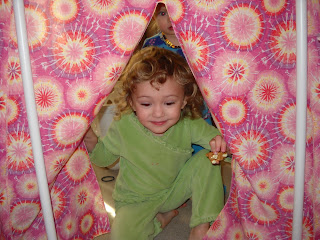 Join the playdate at Beneath the Rowan Tree!
Posted by Jenny at 1:15 PM

Wow! That is fabulous! What a lucky happy baby! Thanks for joiningin the playdate with your great post!

That looks AMAZING! I think I'd like to play in there, myself. Or sleep in there. Perhaps I should make myself an adult-sized tent. :)

Oooh, I love this! Oh, the possibilities!

You never fail to astound me with your creativity!