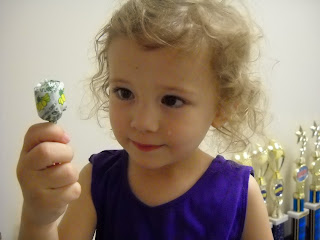 After a six-week summer dance camp, we decided to switch to a larger dance school. Suzi had sometimes been the only child in class over the summer, but when we arrived today, that was not nearly the case.

When we pulled up in the parking lot and saw all the cars, Suzi said she thought that, well, maybe she didn't want to go to class after all. I tried to stay upbeat and not give her any reason to feel nervous. I told her she'd be fine and it would be fun.

Everybody and their brother was there. No, literally, there were a bunch of bored-looking brothers sitting around doing homework, talking, and playing. There were a dozen little darlings in leotards and tutus clickety-clacking around in their new tap shoes in the lobby. Mothers and employees buzzed back and forth, getting girls ready for their classes. And the place echoed.

Suzi clung to me and I couldn't coax her off. We walked over to the door of her classroom and talked about meeting her teacher and going in to dance. She seemed okay with it, and I think it would've been fine, except that the teacher was in there with a previous class and when they finished, she let them all grab a piece of candy on their way out. Suzi saw the candy and figured she'd just get in line behind the girls in that class and have a piece. When I told her she'd be getting her candy after dancing, the meltdown commenced. Her teacher tried to take her hand and walk her into class, but she stomped in place and cried. It was a no-go.

I ended up sitting in the corner of the large mirrored room with Suzi in my lap pretty much the whole time. She refused to participate with the other girls, although she did enjoy watching. I can understand that feeling. I've been there, and I was glad to be there to hold Suzi while she went through it. But I felt like all the other moms were leering at me from behind the one-way mirror. Now I know that isn't true, because Jordan was in there. He said they were talking about the high cost of recital costumes, how great their daughters were going to do, and the excitement of possibly competing. Possibly. Competing. My kid is three. I am so not into that!

We are moving Miss Suzi to a smaller, younger class with the same teacher. She has confirmed that it was indeed the candy that threw her off today, and has promised to actually dance next week. In fact, she came home and danced to Prima Princessa Presents The Nutcracker, which came in the mail today. It couldn't possibly have come at a better time. (I will be reviewing it soon!) I have high hopes for dance, I really do. I think this new class will be much more on track with what she and I need.

But next week I think I'll carry a piece of candy in my pocket. Just in case.
Posted by Jenny at 7:11 PM

I hereby nominate you for best blog post title of the month!!! Very clever. Way to find something that works for your child and not forcing her into something that she's not ready for!

I hope that the new class works out better for you.

Honestly, after 2 rounds of preschool-aged ballet at our local rec centre I couldn't do it anymore. The other parents put a lot of pressure on the situation and I didn't like it. Now we're trying soccer - hopefully it will be lower key. My fingers are crossed.

good for you, Jenny! i agree!