So we went to the Indie Craft Parade...

Saturday Megan and I drove to Greenville with Evie for the Indie Craft Parade. We walked out of the parking garage and both looked at each other and said "hmm, where is it?" No, neither of us thought to look up directions. This is a common occurrence with the two of us. After we finally found it, we were intimidated by the longish line that had formed outside. The event had been open for hours, so we were not expecting this. We worried that it would be super crowded inside. The line moved fast, though, and once we were inside it was not as crowded as I'd expected.

Everything looked beautiful and professional. The table displays were lovely and I can honestly say I've never been to an event like this. I hate that I don't have a picture to share, but you can find some other people's here. I didn't buy anything, partly because I didn't have much money and we needed $2 to pay the parking garage. We also didn't have a long time to look because we were trying to make it home in time for the football game. I loved how they took the time to make a program with a map and the names of all the artists, because now I can go search for Etsy shops later. The Indie Craft Parade was just about what I'd envisioned atmosphere-wise, except smaller. I bet the setup seems bigger when there aren't hundreds of people swarming it.

Only about 80 of nearly 300 applicants were accepted according to the ICP Facebook page, and I'm really curious about the products that didn't make it. There might have been some really wild, ingenious stuff in there that I didn't get to see. It's not that there weren't things like that there; several things spring to mind. This one lady made mermaids and things that looked really interesting. And then there were these guys with lots of beautiful, bright bow ties. Unique, colorful things to wear tempt me more than anything, and I was tempted, but I didn't know if Jordy was ready for the awesomeness of such a unique bow tie. Even though originality was one of the main things the jury was looking for in an applicant, there were participants who had similar products. I saw a fair bit of pottery, several people who made adorable stuffed animals, and Megan said she noticed a lot of knitters/yarn people. I liked (or loved, or at least appreciated) practically everything I saw, but since there were only about 80 accepted artists, I was surprised to see as much similarity as I did between some of the participants. I have mixed feelings about this, especially the pottery part, because I love pottery and, after taking a pottery class, I respect pottery. If you can throw a mug that stands up straight and holds water, my hat is off. Which leads to my only gripe about this event, because I wouldn't mind staying all day and looking at everyone's stuff...

The event space was beautiful, it really was, but I'm hoping next year they are able to find a bigger place. This was just the first year and they turned down two-thirds of the applicants. Next year, now that people have seen how successful the event was, there will no doubt be even more. I'd take a larger, less romantic location over missing most of the artists any day.

And maybe I feel this way partly because I entered some of my things and got rejected, which is totally understandable now because the people who were chosen were great. I only applied because I had no idea how big or small this event might be and thought I'd take a chance since it was the first year. Just as a side note as this has nothing to do with the event experience itself, it would have been great if the jury had taken the time to let each rejected applicant know, in a vague sense, why they were rejected. They said, at least to me, that "unfortunately, the amount of applications we received keep us from providing further information as to why your work may or may not have been approved." Okay, but you charged $10 a pop to apply. I know it would take too long to write a paragraph, but would it really be too much trouble to give a small hint? You could even use a number system like the health insurance companies do when they reject claims:

1: We generally don't think your work would fit in at our event. It's not our thing.
2: We like your concept, but it's not of the professional quality we were looking for. Take it up a level and try again next year.
3: We like your work, but we've already accepted several others with similar products. It needs more originality and uniqueness.

Not that I'm an expert--and there may be hardly any craft fairs that offer this type of info--but I think it would be doable, because surely these things are discussed during the jurying process. It's obvious the organizers spent the time they weren't doing this working hard to make the event the success that it was. However, I especially think a little more information would be a good idea for next year when an even greater number of talented people will probably be receiving rejection emails.

But all things considered, I loved Indie Craft Parade. The lighting, displays, and music all contributed to the atmosphere. It was exciting and inspiring and made me want to make things. The organizers obviously did everything they could think of to make the event a memorable experience for artists and shoppers. I am looking forward to shopping at next year's event, and hopefully then I will have more money to spend. Because trust me, I definitely wanted to. 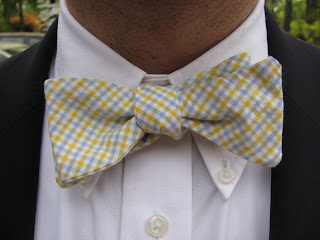 pic from thecordialchurchman.bigcartel.com
P.S. Here's one of the bowties I was telling you about. I found them online and they are made by the Cordial Churchman. Cute, right? I asked Jordan after I came home Saturday if he would be into wearing such a bowtie and he said he would like to. They had one kind of like this but in Clemson colors and I am so sad now that I didn't buy it, but now that I look at the price, I didn't have enough cash on me anyway. Wah.
Posted by Jenny at 4:27 PM

Glad you enjoyed my birth story. I enjoyed writing it and I enjoyed reliving it while I typed it out. It was an intense one, but so satisfying. I answered your questions in the comments.