Friday night I dreamed that I could not wait another moment for an ultrasound, so my midwife Carey met me at the Clinique counter of the local mall and did an ultrasound for me there with a portable, handheld machine. It was discovered that I was pregnant with twins, a boy and a girl. I was excited but then thought, oh no! What does this mean for my homebirth?! I woke up suddenly in a bit of a panic, relieved to find it was only a dream and that I (probably) wasn't pregnant with twins.
My great-grandmother (mother's father's mother) had four sets of twins and two "odd" children, and that, of course, was without any fertility treatment. I've always wondered if it's just a matter of time before Jordan and I have twins, assuming we have several more pregnancies. I am totally fine with having just one baby at a time. There's no need to double-time our way to a large family. Especially this time when we didn't exactly set out to have a baby in the first place.

Saturday, all the nervousness from the past few weeks built up into a paranoia and I called Carey for real. I'd heard the heartbeat a couple of weeks before, but worry had started to creep back in. I hadn't gained any weight like I did with Suzi and Ivey, and it's not because I wasn't eating, trust me! I wasn't having any trouble buttoning most of my pants. Sure, my belly was sticking out a little, but after two babies it pretty much always does. I was supposed to be at 13 weeks but I hardly felt pregnant at all!

Carey came over last night to find Robin's heartbeat with the doppler (reason #367 I could never be happy going to an OB again) and we heard it clearer than ever before. Robin is there and is just quietly hanging out and growing and now I feel much better. I still can't wait to feel Robin moving around though. That's just amazing.

I'm pretty much always wrong, whether I'm guessing for myself or someone else, but I think this baby may be a boy. I just don't feel at all the same as I did with Suzi and Ivey. My skin isn't clearing up as much, I've barely been nauseous at all, I'm not gaining weight... Either my scale is broken and stuck on 135 or this pregnancy is different! (I guess it could be that while I'm not eating less food, I haven't been eating any fast food. We've cut out most junk food and have been trying to cook more from scratch, which ends up being better for us and lower in calories. Plus Ivey is still pretty enthusiastic about nursing.) Of course, my pregnancy with Ivey was different from Suzi's too and I thought she was a boy and was wrong. It could just as easily be a girl. I'd be happy either way. Jordan and I definitely plan to find out ahead of time, and it'll only be six or seven weeks before we can get that ultrasound!

This is my first belly shot (except for the one Megan took several weeks ago). Here I am at 12 weeks and 3 days! 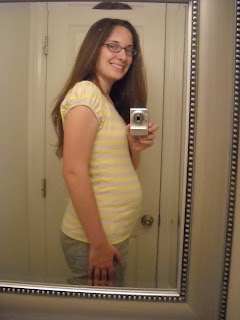 I know you are probably thinking that I am showing quite a bit in this picture for 12 weeks but it's hard to tell because my belly gets bigger and smaller depending on several factors, plus it wasn't flat to begin with!
Posted by Jenny at 11:30 AM

Was a beautiful page. Thanks to the designers and managers...

You look great! I wish my scales would get stuck on 135. sigh.

You and your belly look super cute! I'm glad I won't be the only one showing "early."

Yea for hearing the heartbeat! I keep wondering about twins, too, probably because we've had three friends have twins recently. I know I'd be sad about missing out on a homebirth, too, though!

My fear of having twins is why I do the ultrasound. I've heard all the stories from the '70s of people going into the hospital expecting a singleton and coming out with twins, and I just don't want that to happen.

And as for the guessing, I'm always wrong, too. My husband, on the other hand, is typically bang on. But only for me (and, oddly) my sister. Other people, he says he can't tell.