The sweet smell of Sculpey clay 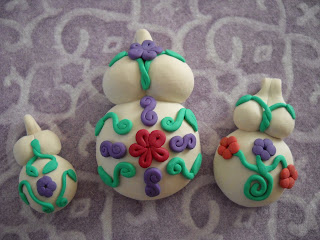 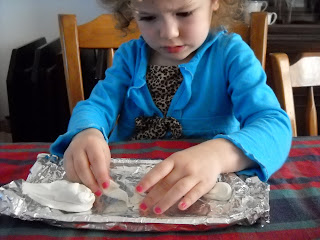 The first time I can remember using Sculpey clay I was in elementary school and was supposed to make a diorama of ocean life in a shoe box. My mom bought me some Sculpey and helped me make a shark, a sea anemone, and a little orange fish.
The clay still smells the same now as it did then. Full of possibilities and so easy to bake in the oven. Suzi and I both love it and it's the perfect medium for a joint craft time. Suzi plays with the clay and makes many different things before finally deciding her project is ready for baking. 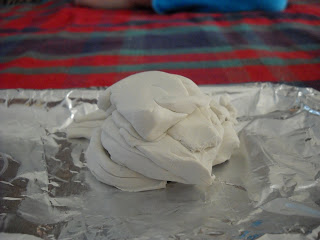 Not yet ready to bake, but she calls it "A Pile of Laundry"
It had been a while since I'd used polymer clay but I decided to get it out one day while we were waiting on Robert and Ivey was sick. It was the perfect quiet, not-too-messy craft activity. Suzi's final project ended up being something sort of abstract that she called "a car and a little man" and I made the three bellies pictured above. Later, I painted them with a satin glaze.
What is your favorite art or craft activity to do with your kids?
Posted by Jenny at 7:30 AM

I love when kids "name" their projects! Never heard of this clay, we'll have to try it out! All our "Crafts" have to do with food!

Sculpey Clay! Great gift idea for a kids project! Thanks for sharing!