Their lives ARE worth saving: a mammogram rant

Just heard about the new recommendation for mammograms, and in my opinion, it SUCKS.
In case you missed it, the yet-to-be-adopted new recommendation for those at low risk is to get the first mammogram at age 50, and repeat every other year. Previously it had been first mammogram at age 40 (although I know women whose doctors have sent them at 35) and getting one every year. I have two stories to tell.

Story #1: My mom is shocked to find out she has breast cancer
She was in her mid-fifties and healthy, and had just gone for her YEARLY mammogram. Meaning she'd had one the year before that was clear. This time, though, there was something on it. This something led to biopsies, several surgeries and chemotherapy to treat her Stage II breast cancer. If she'd waited another year to have a mammogram, as would be customary under these new recommendations, she may have never gotten to meet her grandchildren. I could've lost my mom. I talked to her about this earlier and she agrees with this conclusion wholeheartedly and also thinks the new recommendations are stupid.

Now, before I go on to story #2, let me add one little thing: According to the expert consulted for this USA Today Q&A article, you wouldn't want to go ahead and get a mammogram anyway just be safe because "many (women) find them stressful, painful, time-consuming and, depending on insurance, expensive." I know, right? Just a hassle. You probably don't have cancer anyway, so why worry? 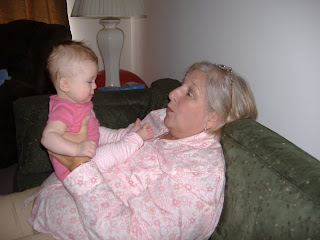 My mom playing with Suzi in 2007, having been cancer-free for years thanks to early detection

Story #2: My first mammogram
I had my first mammogram at age 19 because of a BB-sized lump my gynecologist found. It wasn't fun, but not getting it done would have been a lot more "stressful" as I would have driven myself crazy worrying. Especially after just having seen my mom go through multiple surgeries and chemo, it sure was nice to have the peace of mind when tests confirmed the lump was nothing to worry about. However, the mammogram did nothing for me. This is another interesting facet of this argument. You see, in some women, especially young ones, the breast tissue is so dense that a mammogram is ineffective at detecting anything. I was told before the procedure that they'd almost definitely end up having to do an ultrasound instead, which they did, and they saw the lump quite clearly. So why didn't they just go ahead and do the ultrasound in the first place, saving me all the "stress, pain, time," and "expense," not to mention radiation of a mammogram? We were told that the only way our insurance would pay for the more expensive ultrasound is if they did the mammogram first to prove the second test was really necessary.

If that is true, it certainly does give this argument a black eye: "For every one woman whose life you save in that 40-year-old age group, you're irradiating 1900 others to find that one." Nancy Snyderman pointed this out this morning on the Today Show, but it's been a popular refrain of this debate. So it's okay for insurance companies to irradiate women unnecessarily to save money, but women shouldn't decide to be irradiated to save lives? Please tell me I'm confused!

If the ramifications of a little superfluous radiation is the issue here, which I seriously doubt, why not allow women under 50 to replace their yearly mammogram with a breast ultrasound, particularly if a lump is found during the manual breast exam performed by the gynecologist?

Also, you will never convince me that breast self-exams are not helpful. When I was in college, my honors thesis focused on courage in breast cancer patients and I got to read the stories of many women. This led me to my first job in a boutique that fitted women with breast prostheses and mastectomy bras. Two of my coworkers were breast cancer survivors, and some of the clients spoke at cancer awareness meetings I attended. I've heard my share of stories. One woman credits her little lapdog for saving her life. Happy to see her, he jumped on her chest and his foot landed on a lump, helping her to find it. Some of these women will tell you they had to beg their doctors for the life-saving tests they needed. Their own hands and their intuition told them something wasn't right, and it wasn't. I believe them.

I am just so unimpressed, to say the least, at some condescending researcher saying the equivalent of "it only saves about one life in one or two thousand and that's not worth it." It is worth it. This under-50 set consists of mothers raising young children, working, and living beautiful lives. I've met some of them. Every one of them matters and it is very much worth it to me to do whatever it takes to save them. Ladies, trust yourselves. Keep an eye out for any changes in your breasts. Do what you have to do to get diagnostic tests done, and hopefully there will be enough of an outcry over this that our insurance companies won't even think of denying coverage for them at any age.
Posted by Jenny at 5:24 PM

Wow. Thanks for sharing your stories. I'm glad your mom got the catch in time to treat her cancer.

That is really scary to think of the ramifications of the new recommendations. It's kind of like (possibly unrelated thought here) my fears of the Gardasil vaccine making women think they don't need to get pap smears anymore. Early detection is so important, and you don't get early detection without routine tests!

It makes me mad that they wouldn't let you have an ultrasound right away because of insurance reasons. It makes me wonder if all the recommendations are based on money. Grr.