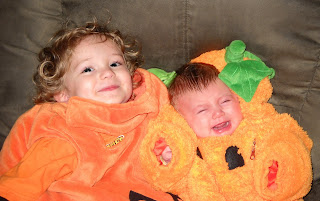 Ivey was sincerely angry, and Suzi sincerely thought it was funny that no matter what I did (including making a fool of myself in various ways), I couldn't make Ivey feel any better about the situation. And they both sincerely hated the hat parts of these costumes.

I wasn't going to put these on here, but my brother told me he wanted to see more pictures of the girls. I told him I didn't have that many, except for a couple of really crappy ones in their Halloween costumes. 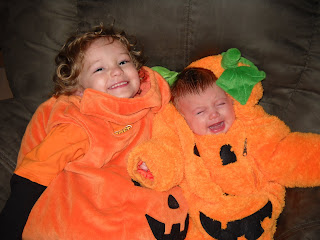 I know it may seem bad that I took these, but I thought, when they are 20 years old they are going to want a picture of themselves dressed up as pumpkins together. So I took the pictures real quick and then we took the costumes right off.

Ivey is not one to put on a big smile for the camera. Not like Suzi, who always has been, even as an infant.

omg this cracked me up! i had the photographer snap a few pics of lucy crying just for posterity.

You know? I think that you're totally right. In 20 years your daughters will be glad to have those photos. It's not like you put Ivey in the costume just to make her cry. But prolonging the agony for a few seconds for posterity's sake seems totally reasonable.

I think you have to have some screaming pics just to remember it by! I remember assiduously avoiding photographing Mikko crying...until we realized it was really cutting down on our chances to photograph him! Just kidding (sorta).

My friend has similar photos of his daughters -- the older one smiling, the younger one crying as though sitting for the photo was truly the worst thing that had ever occurred in her short life. They are now ages 10 and 6 and this is one of their favorite photos to look at as a family. The point at it and laugh and hypothesize about what they were thinking and what the photo reflects about the origins of their relationship with one another. It is actually the only photo that I've ever heard them talk about extensively. Who knows? Maybe this will be a favorite for Ivey and Suzi. And besides - too many people have photos of fake happiness. Who gets to say they have photos of sincere discontent? LoL