Surprise! A party for my mom 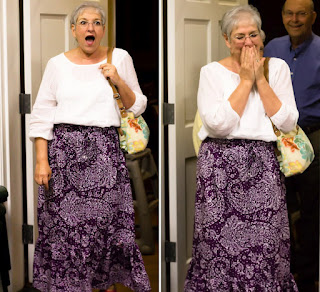 I am so glad the amazing Jenn was there to capture this moment because I would've totally botched it. And she did a beautiful job.
A couple of months ago, we decided to throw my mom a surprise 65th birthday party. This was a crazy idea for a lot of reasons. I've never planned anything without input from my mom. I am not sneaky. And we planned most of this thing in front of a four-year-old and two-year-old. But we wanted to do it--for one, because I knew if I told her she'd say she didn't need or expect a party. I also didn't want her doing work for her own birthday celebration. Besides, surprises are so much more exciting!

We had numerous planning discussions with my dad and others when she wasn't around. With my dad's help, we knew when to sneak into their house to find photos for a montage. It was a little tricky getting the guest list and all those addresses together, but we finally got it. We decided to have it in the party room of a local restaurant, so there was no need for me to cook. I got to focus on what I am actually good at--making decorations and things! I had the best time looking for ideas on Pinterest. My second favorite thing I got to make is this heart bunting (tutorial from Moda Bake Shop). I know it's not Valentine's, but those are my mom's signature colors, and the hearts remind me of the Raggedy Ann dolls she sews, each with a little "I love you" heart on the chest. 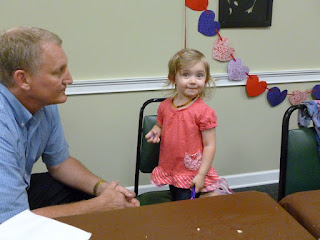 But my very favorite thing I made was her fascinator. Those are melted-edge flowers and a pad of guinea feathers. The feather choice is a little inside joke. It looked really pretty on her. She has one of those cute round heads that looks good in anything. 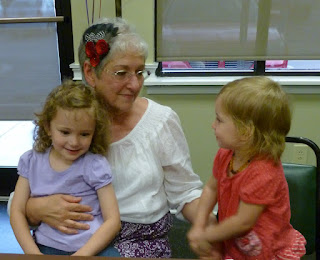 It's a good thing I talked to my mom over the phone in the days preceding the party, and not in person. My face would've told her something was up. She kept saying stuff like "I don't need any big thing for my birthday. I don't even know if Brad or Paul (my brothers) are coming, and that's just fine; we'll celebrate whenever we're together." Of course, they had been planning to come for weeks. As had my grandmother.

My grandmother lives several hours away and we had planned for Jordan to leave before the crack of dawn Saturday morning to go get her and drive her back here. Then just days before the party my dad decided that to make it easier on everyone, he'd ask my mom if she wanted to ride down and get my grandma to come visit for her birthday. Except my mom said no. Whoops! Eventually they did end up going--she had said no because Robert's baptism is coming up and Mama Susie will want to come for that, too. But by the time it was all worked out we'd made up one good excuse for Jordan being out of town and then had to figure out a way to untell that story without making her suspicious.

The day of the party, we said we'd meet her, my dad, and my grandma at the restaurant. Jordan sat out front and waited for them, since he is the sneaky one out of the two of us. When they arrived, Jordan told them we had already been seated in the back and he just wanted to be sure they could find the table. By the time they reached the door of the party room, my mom was saying "gosh, they really did put us in the back!" And then, SURPRISE! A few of the people present had driven for hours to be there. Some of them she hadn't seen in months, like my brother Brad. She just stood there agog for a few seconds. I mean, the whole thing was just so far-fetched it was probably the last thing she'd have thought of. My dad is not the surprising sort and he had been living with her and lying about it for weeks! (Thanks Daddy!) Dozens of people knew about it, some of them were involved in the planning, and no one blew the surprise. It was a group effort! 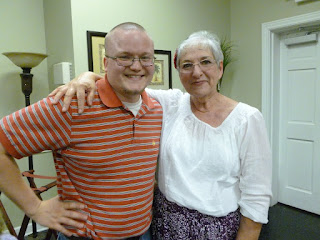 My mom with my sneaky husband 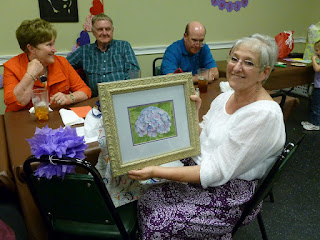 My aunt painted her this hydrangea, one of her favorite flowers 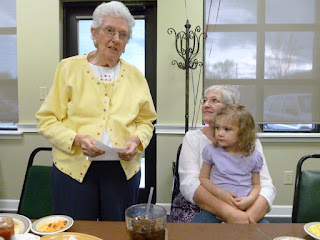 My grandma tells a funny story about my mom 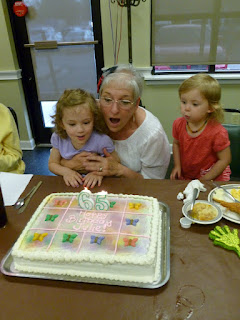 Blowing out her candles with Suzi and Ivey (a friend made the cake)
We turned on the photo montage and she said "you stole my baby book!" Then we told our favorite memories, sang happy birthday, and ate cake. There was a small afterparty at our house.

She said she had never been more surprised in her life! We will never be able to get her like this again. But it was great.
Posted by Jenny at 10:10 AM

Wow, the whole story almost made me cry (happy one, of course)! I'm sure your mum was the happiest lady on the planet on that day :) And, your fascinator rocks!

I love your fascinator!! And that look on your mom's face was priceless. Love your decorations, too. What a fun surprise!