How we did at the Cooper River Bridge Run 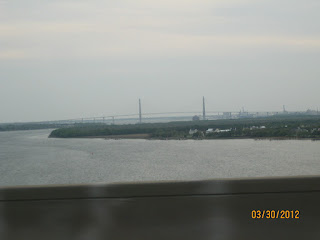 The bridge, from a distance. It actually only makes up a couple of miles of the 6.2 mile race.
I meant to blog about this weeks ago, as it happened March 31, but I figure it's better late than never. 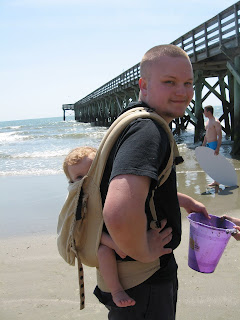 Jordan and my parents and I decided we'd get a condo in Isle of Palms to share for several days so we could enjoy visiting the beach while we were in Charleston for the Bridge Run. We love the beach! At least my mom and I do. The children love it too. 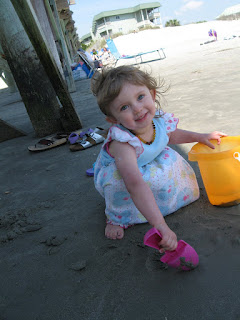 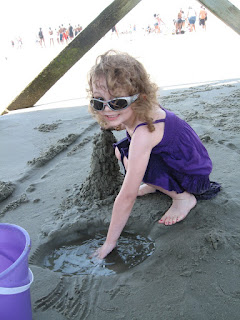 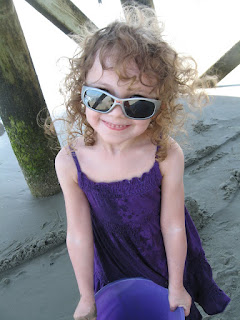 We took sunrise walks, played in the sand and took lots of pictures. We did not go swimming, though--there were way too many jellyfish and the water was cold. Jordan and I took the kids to the market and we went out for seafood with my parents. 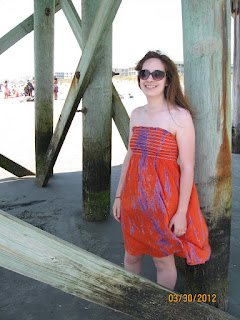 Saturday morning we left the condo at about 4:45 to go to the race. I'm glad we left early, because even trying to park at 5 AM for a race that was supposed to start at 8 was pretty difficult! We finally parked in a garage and got in line for a bus ride to the beginning of the course. Riding the bus felt kind of like being a kid in school again.
When they dropped us off, I started to wonder, as I always do, when my last chance to pee would be. That is constantly on my mind if I am in a place where bathrooms are scarce. And on this particular day, well, I certainly didn't want to run 6.2 miles having to pee the whole time! Luckily, there were tons of portable bathrooms. The first potty station was located nearby the bus drop-off. So we stood in line for that one. Then we walked for a few minutes on our way to the start line, saw another potty station and decided to stop there, too! It was getting closer to 7 AM, at which time we were supposed to be in corral H waiting for the race to begin. We ended up stopping to pee a couple more times, just because each time we thought it might be our last chance. They even had one potty station right behind a Starbucks, where hundreds of people were going for a quick cup of pre-race coffee. Perfect place for a bathroom. So we got some coffee and hit that one, too while we were at it.
We were in line on time, but the race (which was supposed to start at 8) was delayed. We stood there for a couple of hours. There was no room to stretch or move around, and I was just so glad I had Jordan to talk to or I would've been awfully bored! They kept telling us the race would start in five minutes! One minute! Okay, really, just 30 seconds now!!! But they were lying. When it finally did start, I don't think we had ever been so excited to begin a run. Unfortunately, corrals A-G had to go before us and there were so many people that they spaced them a few minutes apart. 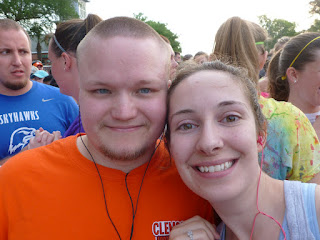 We passed another potty station on our way up to the start line, after we'd been standing in line for well over an hour. Of course we jumped out of line and went one more time, with plenty of time to spare! And then, finally, we were on our way. I've never seen so many people running/walking at one time before. It was awesome. They did their best to keep it safely organized, telling people they were not allowed to have jogging strollers except in the last corral, placing large signs that instructed walkers to stay to the right, and things like that. But people do not listen. One guy had a jogging stroller with no baby in it, just a sound system. He blasted tunes while he ran.
The worst was that people just walked wherever they wanted, some of them in a row several people across. Maybe they thought well, I'm not really a walker; I'm just walking for a little while and then I'll start running again. But this is the worst, because instead of falling into a rhythm and finding a comfortable spot in the pack, they stop in front of you and then after you maneuver around them, they start running again and dart back in front, forcing you to repeat the process numerous times. I get that we are all doing our best, but is it really necessary to trip so many people up in the process? Walk on the right! It's easy! Also, the corrals were organized by speed starting with the fastest, yet some people who clearly should have been in D or so ended up running in our corral or behind us with the walkers, darting around all the slow people.
There were also costumes to entertain us while we ran for over an hour. A group dressed as the Flintstones ran the race in a homemade Flintstones car. There were men in skimpy prom dresses. But the best was a huge yellow Pac Man, followed by several pastel-colored ghosts. I can't believe they ran 6.2 miles in those things! I am trying to think of something fun to dress up in next year that won't make the running harder.
We trained for this with an awesome group called First Flight, and had successfully run 6+ miles without walking at least once or twice back home. However, Jordan and I had not run in a long time due to a foot injury for him, a busy schedule (my mom's party), and awful pollen, so for me especially, this was not my best run. It was also warm and humid, and extremely aggravating having to weave in and out of the run-walk-run-walk-run-walkers. On top of all that, I depend on my iPod to zone me out and my earphones would not stay in! I had no music. We made it over the big hill without much of a problem, and I am proud of that. I eventually started feeling sick, though. We made it four miles, and that's when I told Jordan I had to walk. We walked a mile (over on the right, of course) and then ran the last 1.2. Jordan could have run the whole thing easily. I wanted to run the whole thing, but considering that I couldn't have run this race in my wildest dreams this time last year, I'll take it.
A few yards shy of the finish line, there were a bunch of people cheering and holding signs that said things like "the end is near," "chafe now, glory later," and my favorite, "run like you stole something." They made me smile. We crossed the finish line holding hands, and I heard a splash. The guy behind me had puked on the street, just a couple feet from my leg. Maybe walking a little was the right decision for me after all. I make it a point to never throw up if I can avoid it!
The after party was insane. It was hard to even find a bottle of water, but we eventually did. And a muffin. And then finally we found this enormous grill and got free Johnsonville Brats. The guy handed us a hotdog bun and said "This is YOUR bratwurst. You EARNED this bratwurst." Ha ha. It was a fun day, overall. 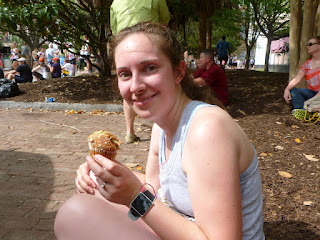 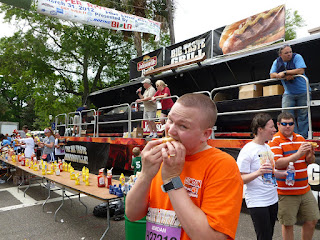 Congratulations! It sounds like you did great, considering how annoying those walkers were. I love the "Run like you stole something." Ha ha ha! I'll have to remember that one as motivation. I also love that you earned your bratwurst — you did, for sure.

I did keep wondering, in the first part of your story. Just how small IS your bladder? ;) Though I agree, you wouldn't want to have to pee during.