Have you seen this movie? 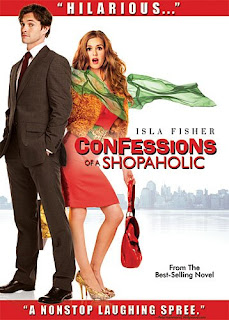 (Here it is on Amazon)


DON'T go buy/rent it now if you're in a spending freeze (we already had it)--but someday, you might want to check it out.  The reviews are very mixed, but I think it's a cute, funny movie.  Also, though I've never blown my finances in such a spectacular fashion, a couple of Rebecca's thoughts and behaviors were familiar to me.  After she has realized how badly she has overspent and is trying to get things under control, a big, important SALE tempts her back off the wagon.  Who doesn't hate missing out on something special?  It feels terrible.  And advertisers know this and use it all the time, don't they?

One of my favorite quotes from the movie is this one: "When I shop, the world gets better, and the world is better, but then it's not, and I need to do it again."  This could describe addiction in general, but I also think it applies to occasional or intermittent shopping while not content.  A new outfit found on sale, or the UPS man arriving with a box of fun stuff from Amazon does make my world feel a little better... for a minute.  I know, of course, that it doesn't really improve anything.  In fact, it might even make things worse by adding clutter.  But since actual, lasting life improvement takes time, energy, and hard work, sometimes when we are stressed or upset it is tempting to try a shortcut.

For these reasons and more, this movie helped get my head in the right place for tackling a spending freeze.  The kids and I watched it together, and although I'm not sure Ivey and Robert understood many of the details, it offered several opportunities to point out what certain money mistakes might look like.  It also reminded me of something important I wanted to share with my children.  I mostly discussed this with just Suzi, because the others are a little young to fully understand and I'll revisit it with them later.  I wanted to "confess" some of our financial mistakes, in the hopes that our children can avoid them.  I am sure we will talk about a variety of increasingly complicated financial missteps as the children grow older and closer to being in charge of their own bank accounts, but for now, I simply explained to Suzi what it meant to have an overdrawn bank account, and why that might happen.

I realize that some people might have a negative balance because they are living in poverty, and I don't mean to dismiss anyone's genuine need for help.  However, that was not the case with Jordan and me.  It has been many years since we have had this issue, but the few times we did, there are several reasons it could have happened:

1) We shared a bank account but did not communicate about it
2) We did not keep a budget or keep track of transactions
3) Instead of building an emergency fund, we made dumb purchases

I explained to Suzi how the initial impact of the negative balance can be compounded by fees, especially if several transactions hit after the account is negative but before you can correct the situation.  We talked about what it means to bounce a check.  Most importantly, we discussed the importance of having money in savings.  If you have an emergency fund in an easily accessible savings account, preferably linked to your checking, a minor overdraft is a non-issue.  All you have to do is transfer the appropriate amount of money to checking, avoiding a barrage of punishing fees, and then make it a priority to rebuild the emergency fund as soon as possible.  If you don't have that, you could end up way far down in the hole.  I told Suzi about a time or two that this happened to us when we did NOT have savings available, and the unpleasantness of dealing with it some other way.  I even sheepishly confessed some of the dumb things we spent money on instead of saving.  The saddest part is that I can barely remember most of the stupid stuff we bought... or I remember donating it later after hardly using it.  Shortly after I had Suzi, I am sure some thrifty ladies were thrilled to find my beautiful but painful like-new high heels on the thrift shop shelves!

In conclusion, I told my kids today and I'll tell them again (and again):  You should have at least $1000 in savings at all times, and if you don't, you should be actively working toward it.  We will delve further into how NOT to end up with a mangled mess of a bank account later on, when I show them the basics of building a budget.
Posted by Jenny at 12:20 PM