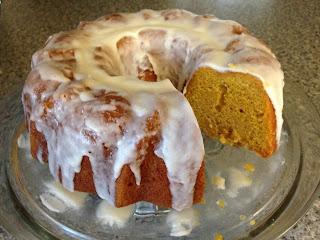 I realized yesterday that there were several items in my kitchen that I needed to use up:

1) Frozen pumpkin puree.  A while back (embarrassingly far back), we baked and pureed some pumpkins after Halloween.  Then we filled a few freezer bags with 2 cups of puree each, labeled them, laid them flat, and froze them.  It's pretty awesome--all you have to do is thaw it, snip the bottom corner of the bag, and squeeze it into your favorite pumpkin recipe!  Some of it was forgotten in the bottom of the chest freezer, though.

2) Gluten-free yellow cake mix--two boxes.  I picked up several boxes of this from our local discount food store.  At 99 cents a box, it was too good of a deal not to!  But like many of the items at the discount store, this had passed its expiration date and I didn't want to leave it sitting too long.  Besides, we really prefer chocolate cake.

3) Buttercream frosting...  From the football game cupcakes!  Usually leftover frosting just clutters up the fridge until fridge clean-out day, when we finally toss it.

I decided to make a big bundt cake with all of this.  I had no idea if it would work, but figured as long as it was somewhat edible, I'd be happy.  Because I added 2 cups of pumpkin, I was able to use a little less butter and one fewer egg than the recipe called for.  I could have used less than that, but I can't stand dry, crumbly cake and wanted to be sure this one was moist (sorry if that word offends you--haha).

The cake popped out of the pan beautifully.  I put it on the cake stand and frosted it before it could cool, so the frosting would melt down the sides.

We had some for breakfast.  It's delicious--and I'm not used to this much dumb luck in the kitchen!  What do you have in your kitchen that you need to use up?
Posted by Jenny at 4:23 PM