How to love your little artist--without spending a dime

I have a craft room that I love... most of the time.  Because it's the one room of the house that no one lives in and company does not see, a lot of junk gets shoved in there.  Company will come, or we'll need to move something that we don't really have a place for, or I'll neglect to clean up after a project or five, and bam!  It's a crap room instead of a craft room.  As of yesterday, it was quite crappy.  So I decided to fix that. 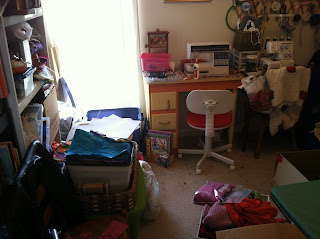 Yesterday morning, a little while after I started this project

On Saturday afternoon we went to pick the kids up from my mom's house (they had spent the night), and when we arrived the girls were making things out of modeling clay.  Suzi (6) had spent hours sculpting a couple of little teacups.  She was so proud of them.  We were getting ready to leave soon, so she put one of her cups on the table and went to wash the clay off her hands.  While she was gone, either Robert (2) or Ivey (almost 4) squashed one of her cups.  She was heartbroken and furious.  Clenched fists, screaming, crying...  It was terrible.  No one should have their art destroyed.

Suzi had a desk at our house, and even though it was counter-height it still was not completely safe from the littles.  I have known she needed a better space of her own for a long time.  We would love to give her a room of her own, but we'll have to add on to the house for that to be an option, so it'll be a while.  I decided to do the best I could for now.  We recently got rid of a ton of stuff we didn't need, which opened up some spaces in the craft/crap room.  The natural light and view of treetops and sky was too much for me to resist.  I decided to set up an arts and crafts nook for Suzi in that spot.

I sent a big pile of fabric to Goodwill, thinned and consolidated craft supplies, moved stuff around, and vacuumed.  While I was at it, I set aside a bunch of scraps, fabric, beads, buttons, and other things for Suzi.  By mid-afternoon it was looking awesome!  I kept the door closed so Suzi had no idea what I was doing in there.  After she was in bed I cleaned off her desk and moved her stuff to the new space.

Here's one more look at the before pic (blech)...

And here's how it turned out! 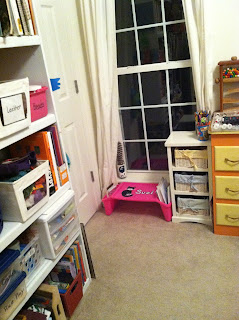 Late last night, after I finished

When Suzi woke up this morning I took her up to her new space and she loved it!  I made a little reveal video a la Clean House but my voice sounds weird so I won't share that.  There are enough craft supplies on that shelf to keep her busy for months.  She's been up there all morning creating things in her pajamas, and keeps discovering new little things tucked away in the baskets and bins.  I even gave her some Sculpey clay so I can bake whatever she makes, and it won't get squished anymore! 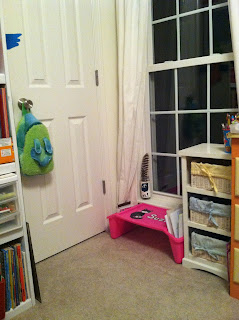 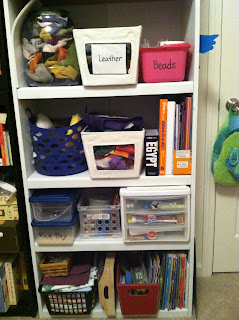 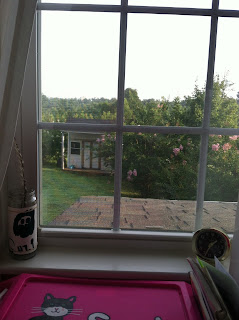 Not a bad view, and you should see it at sunset! 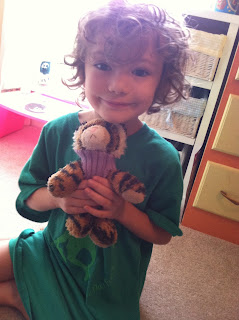 The first thing she made was a little sweater for her "dog," Petey, out of a sweater sleeve.  There have been at least five other projects since then, and when I go check on her she shows me what she's done and pauses to smile and say "Thanks, Mom.  Thank you for everything!"  I feel like a fairy godmother.  Robert's naptimes are going to be awesome because (sometimes) I'll get to spend them crafting alongside my little artist.  And I didn't spend a dime!  Why didn't I do this months ago?!
Posted by Jenny at 11:12 AM