I've mentioned before that since our anniversary is one week before Christmas, Jordan and I have a tradition of making each other an ornament as a gift each year.  Ornament quality is unimportant.  I love taking a little time in the demanding month of December to just make something fun!  Here are this year's lovingly handcrafted ornaments. 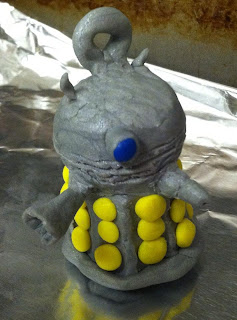 A Dalek, by Jordan.  I really just think Dalek is fun to say.  Dalek. 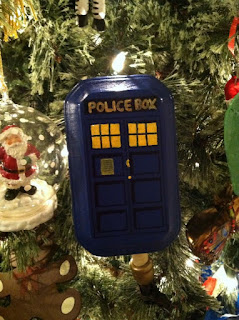 And the TARDIS, by me.  I made it by painting/drawing on a little wooden plaque.

One night Jordan and I decided to watch a couple of episodes of Doctor Who on Netflix.  It is now our favorite.  I know these ornaments will remind me of cuddling on the couch with Jordan after a long day, watching our show.  Once the kids are finally asleep, we can watch one or maybe two episodes before we both fall asleep.  That little window is the best time of the day!

The paint is still wet on the TARDIS and the Dalek is in the oven right now baking, but we got them done!  The festivities may now commence.  Merry Christmas, everyone!
Posted by Jenny at 11:04 PM 0 comments Links to this post 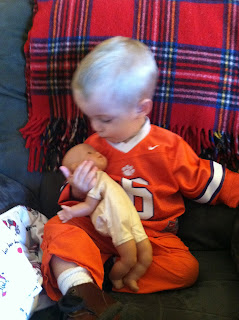 Over the past few weeks, Robert has taken an interest in baby dolls.  He runs around looking for a "babby!" I am going to cry when he learns to say baby. 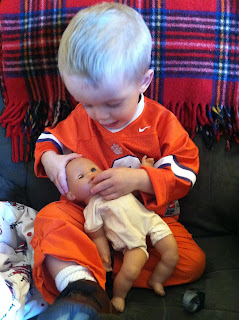 Right now he plays with all of Suzi and Ivey's dolls, but Santa is bringing him one of his own!  This little guy.    I can't wait to see if he likes him!  I'm thinking of making him a little baby sling to carry him in. 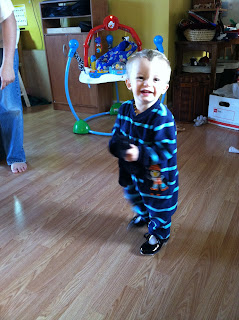 Over the weekend we let the girls watch the Nutcracker on TV, and Ivey wanted some ballet slippers to dance in.  When I got out Suzi's old dance bag, there were ballet and tap shoes in it.  Robert wanted to try the tap shoes. 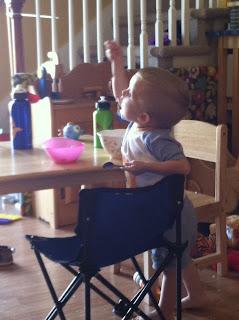 There are certain foods Robert loves, but his sisters could take or leave.  Here he is cleaning up their lunch leftovers, having already eaten his own.  It's probably dirty rice or noodles. 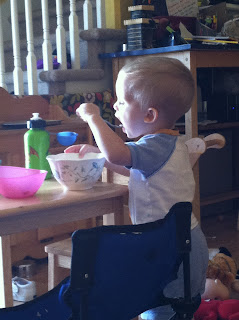 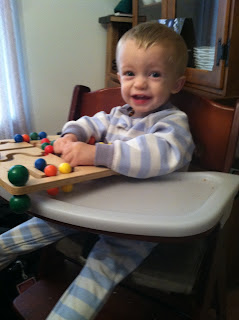 Here he is playing with a wooden puzzle and giving us a little break while we homeschool.  Whew!  He just moves so fast, it's hard to keep him busy (with things that are not dangerous, destructive, or horribly messy).

Robert will be 20 months old on Sunday--incredibly, the same age Ivey was when he was born!  His vocabulary is growing and he's started putting together short sentences.  He says "I love you" and joins in pretend-play games with his sisters.  His favorite toys are balls, babbies, and the toy kitchen where he sometimes makes me cookies and coffee, but he much prefers to spend his time getting into mischief.  He climbs into my recliner while I'm putting away laundry and types things on my computer, shakes his sippy cup into my chair, opens the craft supply cabinet to pull things out, or climbs into a dining room chair to see what interesting things he can find on the table.  When he's feeling generous he leaves all that stuff alone and just pulls an entire living room floor's worth of toys out of the bins.  I could do without all that.  It's frustrating, but I know it will subside as he gets a little older.  I love watching his sweet, funny personality unfold!
Posted by Jenny at 3:06 PM 0 comments Links to this post

Ready to roll (plus some pictures)

Today I have gotten the kids ready by myself, taken them to homeschool co-op, made lunch, read them a Christmas book, convinced all three of them to nap (or to at least pretend), put away three loads of laundry and one load of diapers, and now...

I am ready for roller derby!

And because my parents just took all three kids to their house for a visit and I am sitting here alone enjoying a large glass of liquid chlorophyll, I feel relaxed and awesome about it too.  (Thanks Mom and Dad!)  We'll pick Robert up on our way to practice, but just having an hour or two to rest my brain is such a relief.  Tonight's the first try at passing assessments for me and all the other fresh meat!  Can't wait to see how close I am to being a rostered skater. 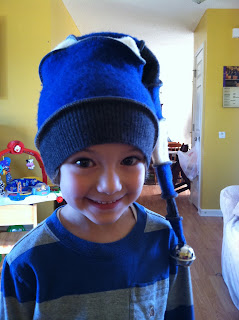 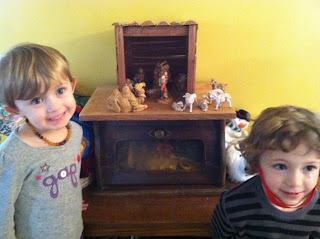 The girls set up our nativity scene.  That is a taped-on ribbon beard Suzi is wearing. 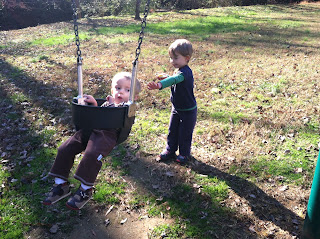 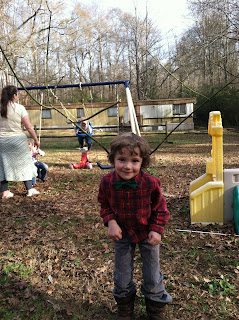 Suzi made herself antlers by sticked a forked branch down the back of her shirt.  It couldn't have been comfortable, but it was funny.  Reminds me of that book, "Imogene's Antlers." 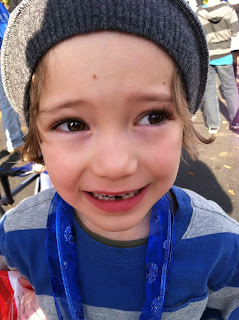 Guess who lost her first tooth!  Pulled it all by herself, too.  Go Suzi!  This is a first for me and Jordan as well as for her--our first baby's first lost tooth. 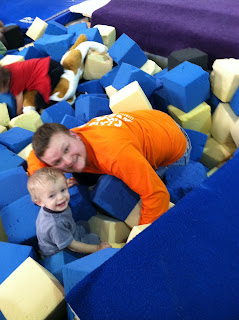 We went to a gymnastics party and it was great!  We thought Robert might be too little to join in, but he wasn't.  Nor was Jordan too big. 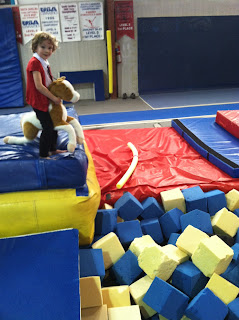 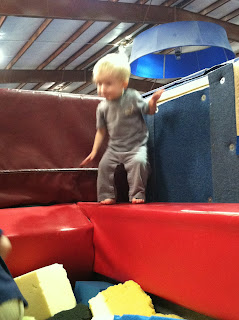 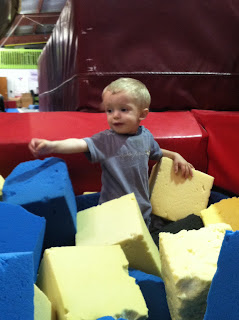 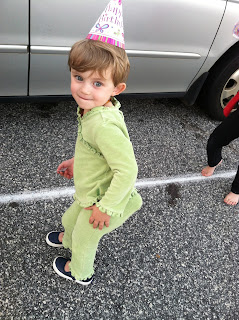 On the way out of the party, I noticed an interesting lump in the back of Ivey's pants.  I asked her what it was.  "An orange," she replied.  She has long thought it was acceptable to use the part of her pants that is meant for her butt as a "pocket."  At least it was only in her pants and not in her underwear! 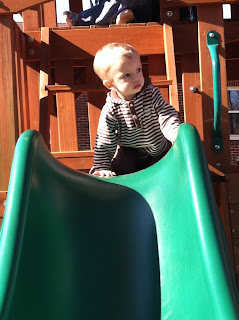 This big boy is climbing tall play structures and going down slides now! 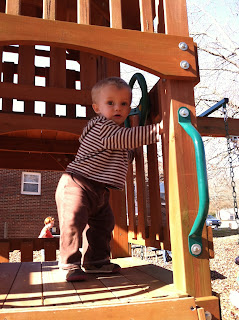 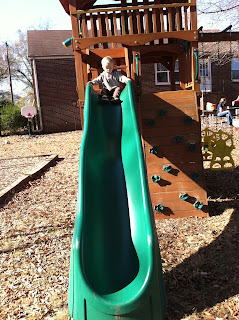 I caught him the first time.  The second time I was taking a picture and he slid before I could grab him.  He flew off the end and fell on his butt.  Sorry Bob!  But he climbed right back up there again.

Well, it's time to get dressed for skating.  Wish me luck!
Posted by Jenny at 5:59 PM 0 comments Links to this post