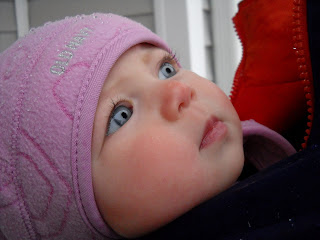 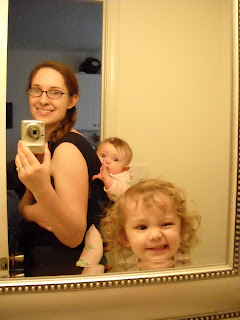 A self-portrait of me and my girls today
Julie's post about Cedar (who is just three days older than Ivey) reminded me not to let this day pass without blogging.
These days are so busy and often frustrating, as I think I've mentioned, but those feelings melt away with time. Eventually I will forget most of them. It's funny to me now how impatient I was feeling six months and three days ago. The last couple days of a pregnancy pass ever so slowly in August in South Carolina. Especially when you hear that your friend who was due about the same time has already had her baby.
Anyway, a (written) snapshot of Ivey at six months:
No teeth yet. There are hints of two bottom teeth, but there's no telling when they'll pop through. Teething has been rough, and Ivey hasn't been wearing her teething necklace because it gets caught in her short, chubby neck and aggravates her. I am going to try it on her again soon. I just have to find where I put it...
A couple of months ago I was the lucky mom whose baby slept through the night until about 5 am. Not anymore! Ivey's sleep is erratic and seems to depend on how she napped the day before, how her gums are feeling, and what mood she's in. She is a happy girl in the morning though, and I love to see her smiling face when she wakes up.
Yesterday we rediscovered our Ellaroo Mei Tai. I was thinking of selling it and I'm so glad I didn't! Jordan uses the Ergo and it's so aggravating to keep adjusting the straps back and forth, so I decided to stop using it. Ivey rides happily on my back for an hour or more at a time, so I can get a lot done. The Mei Tai is getting to be our new lifesaver, as the bouncy seat is almost ready to be put away for the next baby.
Ivey long ago mastered hair pulling, but in the past few days she's started working on her pinching skills. Her fingernails are like little razors. It hurts! She pinches me on the back of my arms when I'm wearing her on my back in a carrier. It's probably because I've taken to wearing my hair in a geeky side-braid and she's gotten bored. The good news is that this skill will serve her well when she starts picking up food to eat.
Technically, today is the day the "experts" say to start solids, but we have no plans to do so. I have been extra careful this time to protect my milk supply and I'm just not ready. Now that we've waited so long, I want to pick the perfect first food for her. I don't want to give her rice cereal, so what should I start with? Certainly it will be something fresh that I cook (if needed) and mash up myself. Suggestions?
Ivey's #1 pet peeve is when we put her down and try to walk away. Usually this means on her quilt on the floor with a toy or two. If we want to sit next to her and keep her company, that's fine, but stand up and start walking away, even for ten seconds, and WAAAAH! It is so not worth it, and that's why our house is a mess most of the time! She likes her Jumperoo, but she prefers when one of us is standing or sitting right there in front of her. When she falls asleep during the day (always while nursing!) I stand up and lay her in the recliner. About 1/3 of the time she wakes up and looks at me with angry, accusing eyes and screams at me. The rest of the time I do a silent victory dance and get to work on the piles or laundry and dishes that await. Then I blog, like I am doing now.
Although Ivey has learned to sit up, she gets tired and leans forward after a while. She can't quite crawl yet, but she flops like a fish trying. It's cute. If she's anything like Suzi, the inching along on her belly will start soon.
Most of Ivey's hair has fallen out and it's growing back lighter. We think it'll probably be straight, and I'm glad. I want some hair to play with and Suzi's is too short with those curls. Ivey has one little tuft of straight, dark hair right in front and I brush it into a little mohawk curl after her bath. All the rest of her hair is too short and fine.
Ivey loves her big sister, and Suzi loves her back. She makes Ivey laugh, brings her toys to play with, and kisses her goodnight. It makes me so happy.
There is beautiful, abundant snow outside and we went out for a little while already. We are about to go back out and build a snowman (pictures later). It's been a wonderful half-birthday for my little baby :-)
Posted by Jenny at 8:02 PM

Cedar hangs in the Ellaroo MT on my back throughout the day. I have to wear my hair in a bun on top of my head b/c she loves to pull my hair.

We tried some avocado mixed with some breastmilk.

Great photos! For a first food I like avocado, banana, or sweet potato.

Ivey's getting so big!

First foods that have been a hit here include banana, avocado and baked sweet potato. I mash it and put a pile on the high chair tray, then let the baby feed themselves. That way, I can know for sure whether they're ready for the food or not. Plus, even if they're not ready, squishing food can be a great way to entertain a baby while the rest of the family eats.

Fresh, mashed sweet potatotes are tasty for most babies and full of iron - I started Leah out at about 6 1/2 months and she still loves them!
I agree about the avocado too, Leah loved those at first, but is no longer a fan.
You look great and your kids are adorable. Maybe when Ivey starts getting mobile, you'll be able to put her down more often.
Crystal Gilstrap

Hi! I've also been meaning to comment on *this* post for several days now. :)
I have wanted to say that an egg yolk per day is a great, wonderful, perfect first food. Forrest has definitely eaten bits of sweet potatoes, bananas, carrots, and even beans, but ultimately, I don't regularly feed him anything but a soft-cooked egg yolk once per day. We buy eggs at our local co-op, so they're extremely fresh from pastured hens, but if you have eggs like that available to you, it would be a good way to start. I put the egg in a pot of water and bring it to a boil (boiling for a total of 3.5 minutes). Then I run cold water over it until I can handle touching it, peel it and squeeze the still-soft egg yolk into a bowl (don't use the egg white because the proteins are difficult for baby to digest). I sprinkle it with unrefined Celtic sea salt, mix it up and voila! A wonderful, nourishing first food.
The traditional cookbook I follow (Nourishing Traditions by Sally Fallon) recommends feeding only egg yolk and occasional banana until 10 months. Then, introduce steamed root vegetables and season them with unrefined sea salt and real butter. Also, they strongly advise against any grains until baby is over a year!
Anyway, just thought I'd throw that in there in case it's helpful! :)