We are at Jordan's parents' house. We came here today with the intention of getting adorable Christmas pictures made of Ivey, Suzi, and their cousin Michael. I was hoping Ivey would be in a good mood, and she was. Little did I know that Suzi was the one I needed to worry about. She eventually consented to be in the picture, but only with her Nana, and she didn't crack a single smile. Not even a little one. 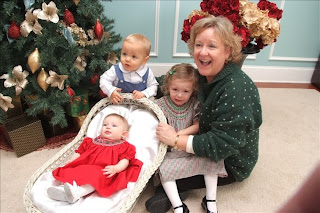 Kicking, screaming, crying, gagging... It was so bad, and people were staring. The place was crowded with children and irritated parents waiting their turn and I know half the problem was that Suzi felt pressured to perform. I shrugged and explained to the photographer that she's two, and it happens sometimes. It was so horribly frustrating, but once it was over, we laughed and bought a bunch of pictures with Suzi whining in her Nana's lap. We realized we loved these pictures. Especially as we have more kids, there may never come a time when all of my children are smiling at once. But pictures like these are real, at least. I asked Suzi why she wouldn't have her picture made (later in the van, when she was calm) and she said "'cause I pitchin' a fit." It's really cool that we have a picture of Jordan's mom with all her grandkids, and this is the only way we would've gotten it, because she just wanted one of the children. 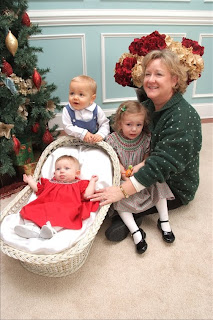 I think this one's our favorite 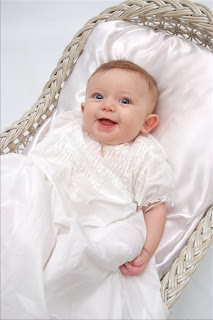 Ivey looked so pretty in her Christening gown her Nana made
I said before we left that we would never do this again, but I know good and well we'll have them all dressed up again next year, hoping things go better. Sigh. When we finish it'll be an ice cream cone for the kids and a glass of wine for me.
Posted by Jenny at 6:32 PM

My 4 1/2-year-old daughter is a photo-taking whiz, and always has been. My 16-month-old son, on the other hand, was SO not into it this year. I had to leave the room, because every time I tried to put him down he clung to me so tightly that I couldn't get him off. Eventually I left him with his dad and sister, and we got one shot of him not crying.

I agree - at some point down the line, I will probably treasure those photos. But it's super stressful for everyone when you're just trying to get that one shot. After we were finished the studio tried to sell me a membership card, and I declined because there's NO way I'm going back before next year.