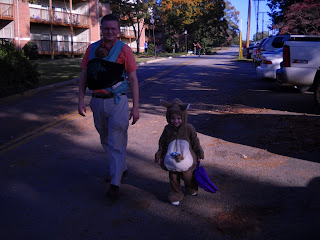 This is what Suzi says she did last night. She was a kangaroo, and she had in her pouch not only a little joey but also a stowaway. She wanted to take the blue puppy trick-or-treating too. 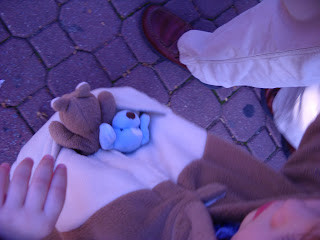 Last night was the downtown trick-or-treat in the town where I grew up. All the merchants gave out candy and there were little games for the children to play--mostly beanbag toss type things. Suzi was really too little for the games they had, but she wanted to try anyway. They congratulated for her hitting the platform even though she didn't get the beanbags in the hole, and gave her candy anyway. 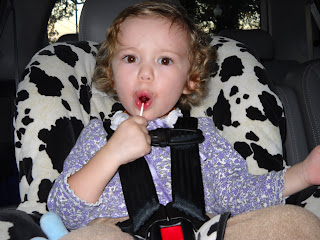 And then she went back to the van and got started eating it. It kills me how much she looks like Jordan in this picture. I mean, this is exactly how he'd look if he were eating a Tootsie Roll Pop. I love it!

This is just the beginning. We have lots more fun (and another costume) planned for this weekend. Unfortunately I feel kind of funny today, like I might be about to get sick. I really, really hope it's my imagination. I recently made a few changes in my eating habits, so it could be that too. We'll see.

We had trick-or-treating fun today in our little neighborhood shopping area, where Mikko would say "trick or treat" or "thank you" only after we were out of ear shot of the candy holders, and then he'd turn to us and say "more trick or treat?" Apparently getting strangers to hand you free candy was a big hit.

Later we went to a community center carnival, and it was the same thing, with all the games being beyond him. He couldn't have cared less. He picked a balloon off the floor and started tossing it everywhere. There was a tire swing set up for a game where you toss a football through it, and his favorite thing was to sneak up to it when it was free (and sometimes when it wasn't) and push the balloon through the opening. So much fun to be 2 and oblivious to all the rules & social norms!