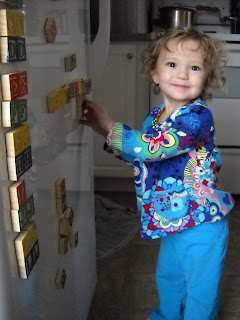 She does love the magnets. She found them on our fridge, gasped, and immediately began rearranging, sorting, and trying to spell words. Suzi has already learned so much just through play. She knows her colors and shapes and can count to ten. She knows some letters, too, and has an excellent vocabulary. No one has forced her to learn or memorize anything. (I can only imagine how well that would work with a two-year-old, anyway!) What she has learned has been picked up through interaction with others, teachable moments during play, and reading books. When I was working, Suzi spent time with an experienced former kindergarten teacher (my mom). She taught in public school for nearly her whole career and had a deep respect for open-ended play. I have frequently heard her say "children learn through play!" We were talking yesterday and she agreed that by the time Suzi is old enough to start kindergarten, she will probably already know most of what they are going to teach. This boosts my confidence that when the time comes I will be able to homeschool her, and that it will be the best choice for her. 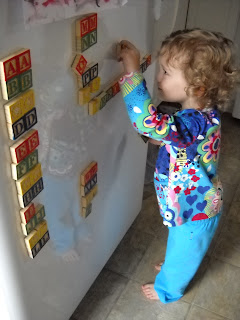 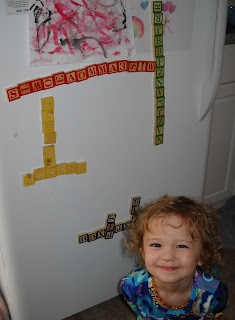 According to Suzi, the letters were animals of some kind, which is why she has them arranged this way. Gotta love her imagination.

Just as we are appreciating the value of play, our president wants kids to spend even more time being drilled in a classroom. I have lots to say, but I will save it for another post. Baby Ivey is calling.
Posted by Jenny at 9:00 AM

I love your new masthead pic!!!

My aunt has been a 2nd grade teacher her whole life. She says kids have already lost there spark for learning by the time they get to her now. 10 years ago it wasn't like that. Kids are stressed by the testing and get a 20 minute recess. She's been my greatest supporter for homeschooling!

I love the imagination in the arrangement of the letters! Kids all learn so differently, too, don't they? And then schools try to force them all to keep up or slow down to match each other. My 2-year-old, for instance, sings the alphabet song all.day.long, in English & German, and can't get enough of letters. But he's not very creative yet in terms of make-believe. It's so intriguing to watch how and when they develop different skills and interests.

One is sad (for me) news: I keep having trouble accessing your blog -- it crashes Firefox & Safari on my Mac. I figured out I can get to it in Opera, so I'll do that. Part of the page loads and then crashes the browser, so it's likely something in the sidebar. I hate to the bearer of bad news about stupid technology incompatibilities, but just in case it's something that's affecting other readers, thought I'd mention it. I've personally gotten notice of stack error overflows or some such in Internet Explorer for my site, and I can't even replicate that at home so just had to fool around and hope for the best. Let me know if you want me to Mac-test drive any changes you may make.

But forget that. Now for...

The GOOD NEWS! I've passed on an award to you. I always enjoy your insightful writing and the perspective you have on parenting. Thank you!