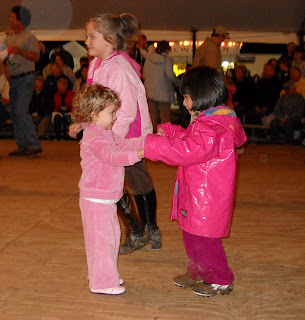 Last Saturday night we took Suzi and Ivey out to Oktoberfest in Walhalla. The field was one big mud puddle by the time we arrived and we felt like idiots for not wearing rain boots. I ruined a pair of shoes; luckily I'd had the foresight not to wear my beloved new ones (which are so great I may have to blog about them later).

The tent with the music and dancing was somewhat drier and still had a bit of grass left. We'd come for the music anyhow (not the rides or the greasy food), so we got a seat in front so Suzi could see. When the Little German Band began to play, she got her daddy to take her out on the dance floor. Then the other kids began dancing and she wanted to join them (see video). It was cute, and the kids were so sweet to her. We've noticed she enjoys playing with kids who are slightly older. She also loves dancing, and I definitely foresee us enrolling her in dance classes when she gets a bit older.

We had fun, despite keeping Suzi up several hours past her bedtime. We probably paid for it Sunday, but I don't regret it. There were dancers with the band as well and we videotaped one dance which I may post later. Someone with the band helped me pick out a CD for Suzi, and she listens to it in the car. She says "I like that music!" and kicks her little feet to it.
Posted by Jenny at 12:00 PM

When Lydia was 5 or 6, she and her daddy went to the Daddy-Daughter dance hosted by the Girl Scouts. When they came home, I asked Brad how he and Lydia liked it. He said that she only danced with him once and then went to play with her friends. When I relayed the story to my mom, she clearly had a different mental image than I did. She asked,"Well, what did she do? Dance with all the other daddies?!"