Married to a geek 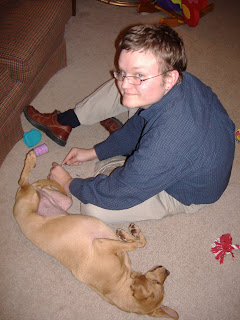 I know I've said we don't have cable, but I haven't said much about what we do have. Jordan made us a home theater PC. He custom built it for around $300 in parts he ordered online. At first I questioned whether we needed to make such a large purchase for entertainment, but we had a little extra money at the time (it was a few months ago) and some of it was his birthday money. For Jordan, half the fun was putting it all together. Some guys enjoy golfing, but Jordan prefers geeking. (Although he does enjoy golf too.)

This thing, which is a little smaller than a regular PC, does a lot for us. Most importantly, it contains a digital tuner so we can watch TV with our antenna. He put Windows Media Center on it, which allows us to view something kind of like the TV Guide channel--something I missed from having cable. I like to see what's coming on so I don't miss something important. But you know what's cool? Just like TiVo, we can set it to record shows. Jordan records Everybody Loves Raymond for me so I can watch it whenever I get bored, and we also record American Idol, which is handy because I often fall asleep near the end of it. Last night Suzi was watching Mary Poppins and we didn't want to cut her off unexpectedly, so we recorded American Idol while she watched Mary Poppins. Then we turned Idol on and fast-forwarded through the commercials!

And my favorite thing is that we can stream Netflix right onto our TV. Anyone can stream it onto their computer, but who wants to watch a movie in front of a computer monitor? We pay $9.95 a month to get one DVD at a time and unlimited streaming, which is still cheaper than renting a movie at Blockbuster and then having to pay full price for it after forgetting to take it back for like a year. Most of Netflix's movies and shows are not streamable, but we are discovering all kinds of fun stuff to watch.

So I'm proud of Jordan. The picture is of him giving Phibby a mani-pedi (well, pedi-pedi) earlier tonight. I don't have a picture of him putting a computer together.
Posted by Jenny at 7:14 PM

We use Windows Media Center too, and love the recording function. We watch all our TV on our monitor, but we have a 20" monitor and don't really mind... I sometimes let my kids watch their shows in a small window while I do work on the other half of the screen.

That's so funny....Jordan and Jeff seem very much alike! We don't have cable anymore either...but Jeff does the same thing with his computer and his XBox....so we use the remote just like we had cable- with media center :-)

that is not geegky that is plain smart and very useful. I am sure many wish they had a husband that could do all that for their family!