How we get by without cable, part two 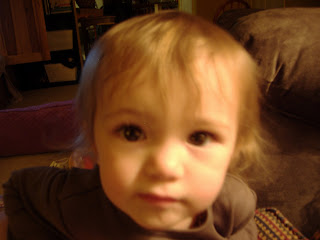 Suzi is running around with a toy milk bottle saying "Daddy, shum? Mama, shum?" When we are having a snack we always ask her if she "wants some," so she extends the same courtesy to us.

Earlier she farted and tried to blame it on her doll. "Toot-toot, baby!"

Friday night she came to ask me for some of what I was eating, but I knew it was something she didn't like, so I told her she was "barking up the wrong tree" (a little phrase I learned from my mother). I told her to "go bark up that tree over there," meaning she should go ask her dad for some of what he was eating. She walked past him over to the window and said "woof, woof, woof!"

At the park today she went down the big slide (which she calls the sliding board, as she probably learned from grandma and grandpa) all by herself... at least 15 times! That made for a nice long nap.

Chicken nuggets she calls chick-pah-pah. She calls chips chipmunks. Normally we get chips out for her and hand them to her, but right now she is sticking her tiny little arm down into the bag nearly up to her shoulder, plucking out a chip, and proudly saying "I found chipmunk!" 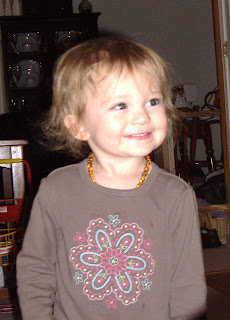 Suzi is do delightful.
I love to see the photos you post. Each time Suzi no longer looks like a baby and is getting cuter by the minute.
I love the comments she made, expecially barking up the tree.LOL

what a sweetheart! Sara, 2, just told me the other day "I love choco milk" I just started to laugh! She tells me all the things she loves!

LOOK AT THAT CHILD! That smile in the bootom photo is simply too die for. And I LOVE how she blamed the toot on the dolly! Clever child, she is!

(Thank you for your kind words and support re: our recent employment challenges and our path to solvency! Wishing you all continued discoveries of those means to keep things simple and happy in your home. From the looks of things, it's a joyous place. :) )

Jenny, i found your blog absolutely hilarious!! Esp the pooting and blaming it on the doll. Unfortunately for me, Kevin will fart, and blame it on Grace!! We too are doing without cable, and I don't mind it at all, we like to watch the weekend nature shows they have, and love them! I saw your 15 week preggo pic and you look absolutely wonderful!

Cute pics and her little words...so sweet, do not ever forget those!