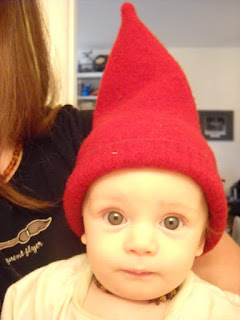 Robert in the gnome hat I made him

Ever since I started this blog when Suzi was a few months old, it's served as a baby book for my kids. But Robert is my third child and I've really slacked off on keeping up with his milestones and things! It's hard to find time to blog, especially now that I'm also into Facebook and just discovered Pinterest (which is fantastic by the way). So anyway, today I thought I'd write a Robert update. He just turned seven months old November 9th.

1) The first week of November sometime, we gave Robert some mashed up sweet potatoes (from Jordan's family's farm--yummy). He smushed them around with his hands and when we tried to put them in his mouth he was like, you guys are so weird! That's what milk is for! However, he will happily gum down a large apple slice or carrot. Fine with me. We'll try again soon.

2) Robert wins at hair. It is curly-wavy and long on top. Jordan says we'll have to cut it soon, but I say NO.

3) It's like I hadn't noticed that Bobber is no longer a newborn. He nurses all the time like he's a newborn. And he wants to be held all the time like he's a newborn! But yesterday I had a Norwex party and my friend brought over her sweet baby girl who is about three days younger than Robert. (Robert liked her, by the way! And she attended his birth, as her still-pregnant mommy came as a midwife apprentice. Cool, right?) Well, Terri was all over the place, crawling, sitting up on her own, pulling up on furniture. Robert does none of these things. He can sit up, but every time I try to sit him in the floor he straightens his very strong legs and makes me lay him down instead. I decided that maybe I haven't given him enough floor time. A rowdy two-year-old sister running all around will curtail that pretty quick. I'm going to start encouraging him more. 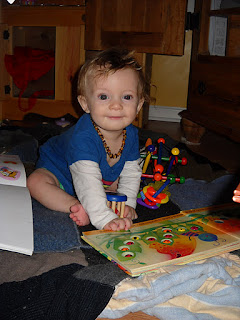 See? A happy baby boy sitting in the floor, right? About two minutes after this pic was taken, he reared back and whacked his little head. Which required nursing and cuddles. He does this regularly, and then the next time I try to sit him in the floor he is understandably skittish.
4) The boy loves to cuddle. He has started to spend somewhat reasonable amounts of time out-of-arms in the Jumperoo and even sometimes on his belly scooting around in the floor. But he prefers to be cuddling, especially if he is nursing and cuddling. I like it too. Our cuddling time, when he falls asleep, is my Facebook/Pinterest time. He also loves being on Daddy's back in the Ergo. And guess what? Mommy loves that, too. Soooo much. 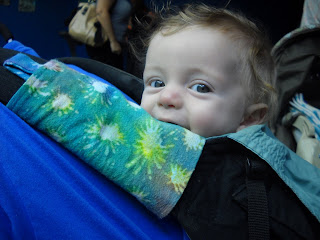 5) He hates baths. Screams through them. We usually take him in the shower and just wash him as fast as we can, poor guy.

6) No teeth yet. It's no big deal; I just thought I'd make a note of it so we can remember later.

7) Bobber is not a big guy. Kind of medium, I guess--we'll find out his weight when he goes for his checkup sometime this month. His friend Baby Crayon who was born several months later is about his same weight. I held Crayon the other day and it feels so strange, because he feels about Robert's size but just sits there when you hold him. Robert flails his arms and legs and tries to leap out of your arms or stand up in your lap. 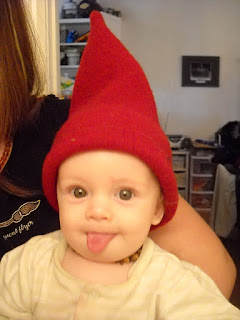 I love this sweet little boy. In the next week or so I'll try to get updates posted for the girls!
Posted by Jenny at 10:01 AM