15 months today (and other miscellaneous thoughts) 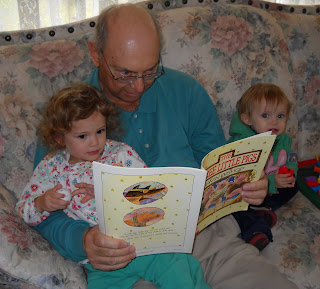 The girls love Grandpa
I've been meaning to blog but the opportunity hasn't presented itself. Actually, I did blog Tuesday night, but I didn't publish it. It was a horrible day and once Suzi was in bed I wrote a long, irritated post that I knew I'd probably never publish. Here are some excerpts:

Upon arriving home from dance I so stupidly thought I could take both the car seats out and adjust them and put them back in before dinner. I unhooked them successfully, and even adjusted them and vacuumed all the nasty crumbs out. Things were going great. Then, while the girls played "airplane!" on the back seat, I tried to hook one back in. But the car seat company must have decided that it would be a real shame for a mom to be able to install a car seat all by herself, so they made the strap that hooks to the latch system too short to hook to both sides without superhuman strength. Now it is really dark outside and both car seats need to be put back in. At least it will have to get done now. Getting Ivey into her seat has felt like a wrestling match for weeks.

I was once a silly little college student who thought I had no time to do anything. And now I want to go back in time eight years, run up into my dorm where I didn't have a bathroom or a kitchen to clean and slap myself.
~~~~~~~~~~~~~~~~~~~~~~~~~~~~~~~~~~~~~~~~~~
It's funny how things can seem so horrible one minute and then three days later you've almost forgotten about it. It's one reason I blog, so I can remember. Oh, and it turns out I was putting the car seat in wrong. Of course. I'm pretty sure it's Britax's fault somehow.

Today Ivey is 15 months old. She's decided she doesn't like wearing diapers any more than I like changing them, and for the past few days has been going in her potty most of the time. I've tuned in to her signals better, and she's gotten much better at telling me when she has to go. One time yesterday she removed her diaper all by herself, sat down on her potty and peed. Using the potty seems to fascinate her. She sits down and pees or poops (or both) and then stands up, points at it, and says "pu-uh." Right now I am letting her run around diaper-free because she'll usually just go sit on the potty when she needs to use it. It's about lunchtime and she hasn't had a miss yet. 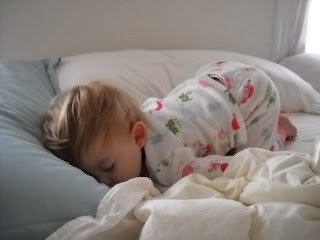 Ivey just before she woke up this morning
I've been meaning to add Ivey's new words on here, too. She says apple and points to the Mac logo on the laptop. Daddy is so proud. She has been saying thank you for a while, but it sounds like deh-duh. So polite. And my favorite is that she's recently taken notice of belly buttons--her own and those belonging to others. She points to her belly button and says "butt-butt!"

Tuesday we are going for our ultrasound! I called earlier to see if they would record it and to find out what to bring (DVD-RW) and found out they don't really want us to bring our kids. We are bringing Suzi anyway. There is no way I'm letting her miss this. She already loves Baby Robin so much and I want her to be there when we find out if it's a boy or a girl. Ivey probably wouldn't be interested anyway, and at least we'll have the DVD to show her later. We don't have a DVD for Ivey's ultrasound.

I have to mention the new supplement I am taking. I called my midwife Carey the other day as I was walking through the vitamin section of Earth Fare and she told me to pick up some ChlorOxygen. You add 20 or so drops of it to a glass of water. The extremely dark green color scared me at first but it wasn't bad at all. I've never had much energy, especially not while pregnant, but these past few days I've felt great. I've started to crave a dark green glass of ChlorOxygen instead of a hot cup of coffee. It's actually better than coffee. Seriously, you've got to try this stuff. It also reminds me to take my prenatal vitamin and helps me drink more water.
Because I have been feeling so great, I've had the energy to do things I wouldn't normally do, like bake pumpkin bread and pumpkin pie all in one morning. I'm currently trying to figure out the perfect recipe for cute 6-inch pumpkin bread loaves. You know what I mean--dense, moist, the perfect pumpkin-to-flour ratio, with absolutely no regard to what would be healthier. We are making nearly all of our Christmas gifts (I'm getting scared) and edible gifts are part of this! I need to get to work on some of the things I'm planning to make but have never actually made before. Waiting until the last minute won't work this year!

I can't wait to find out if we're having a boy or a girl, but most of all just to see that little Robin is doing okay. I should have some pictures of him or her to share next week!
Posted by Jenny at 12:15 PM

I love the "butt butt". Too funny. Sounds to me like Ivey is on her way to potty training. That will be awesome...

I'm glad you have more energy now. : ) Just forgive yourself those awful days. You 3 girls are wonderful and beautiful and healthy, Britax can eat it. I can't wait to find about sweet Robin either. Sounds like next week will be a good week.

I love reading about Ivey. The stories you write are so much like my days with Cedar. You know I'm an EC dropout so we're not doing great with the potty. Cedar wears it as a hat. BUT!! This week, I heard her take her diaper off and then she peed in it. Fluke, I'm sure. But still!

And chloroxygen is good, good stuff! Just don't drink it straight. Ever. Have you seen that photo of me on facebook?? Shiver.

I have a delicious pumpkin bread recipe on my blog. But it is not remotely healthy. Not at all!

I can't wait to find out what you're having! You must come here and blog once you know. MUST. :)

You are tantalizing me with this ChlorOxygen stuff, even though it sounds like something you put in a pool. Must try to get my hands on it.

Thanks for sharing the good as well as not so great moments. It helps to know I am not the only one who is split personallity about my child. How can I love him so much and yet be driven so crazy at times? It is just part of parenthood.
Wouldn't trade it for the WORLD!