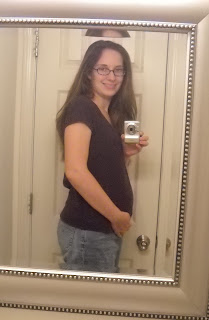 15 weeks, 5 days. This picture looks foggy. Dangit! Which one of the girls stuck her finger in the camera lens this time?
I am 15 weeks pregnant, 16 on Saturday, and since Ivey is asleep right now (on me, by the way) I thought I'd take the opportunity to do a pregnancy update post. I went to see Carey and Jackie Robins (CNM) at Carey's office Monday. It's nice to have prenatals with sweet ladies like these! I had blood drawn; glad to have that over with. Carey talked me into doing a blood sugar check (the finger prick kind) later on. At least I won't have to drink oversweetened orange soda and get stuck with big needles twice. Hated that with Suzi! I'm not really worried about gestational diabetes after it wasn't an issue in my first two pregnancies, and my diet has actually been better this time anyway.

I haven't gained much weight. My weight at the appointment was 134.8, and I might've started this pregnancy a pound or two under that. I attribute this relatively small weight gain to eating hardly any fast food these days and having two kids to chase, but mostly to Ivey breastfeeding all the time! She's nursing as I type. I think she must know she's going to have to share soon.

I told Jackie how I didn't really feel pregnant, and she said she could definitely see that I was, which is what others have told me too, and yes, I am starting to really show. My uterus measures up where it should be. The heartbeat is always there when we check. I think this will feel more real to me when I get my ultrasound or start feeling the baby move. I have thought at least ten times that I've felt Robin moving, but I always talk myself out of saying I officially felt quickening. In a week or two surely I'll be able to say it was the baby.

I've thought it's a boy. Then, no, it's a girl. But, probably it's a boy. I don't know. I have never once been right on a guess, for anyone, and I don't really care either way but we do want to know. We were going to get a free ultrasound at Greenville Tech, but apparently they are booked solid through December. Since I will be ready for my ultrasound in about a month, and since we've met our insurance deductible, it looks as though we won't be going back to get a free one this time. Bummer. The ladies who do the free ultrasounds are always so sweet.

I've had the song "Rantin' Rovin' Robin" as performed by Coyote Run stuck in my head sooo bad. Love this song and this band. And it kind of, all by itself, makes me hope this is a boy. If it is a boy, maybe we will go ahead and name him Robert like Jordan wants, but I will call him Robin. The song was written by Robert Burns in honor of himself. Funny, huh?
Posted by Jenny at 4:41 PM

And I can so relate to the kids sticking their fingers on the lens and the resulting blurry images. So. Relate. :)

Nice picture! Thanks for the update--I've been wondering when we'd get to hear again about how you're doing with this pregnancy.

You really don't look pregnant, do you? But you do look great! I may need to start nursing something so I can lose some weight . . .

Great snap. I think most of us start feeling pregnant by this time which I think even you are sensing now. I started sensing the bumps and kicking of my baby ouch I forgot to tell you I am now 15 weeks pregnant gained some weight too. Keep writing your updates…