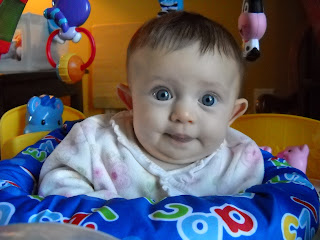 Over the past week, I've realized something. Rather than a list of things to do, I prefer to keep a list of things I've already done. A list of things you still have to do is depressing, especially when you don't finish some of them by the end of the day. I never know what I'll be able to accomplish in a given day, because Suzi and Ivey are my first concern. If they are needy all day, I won't get anything done all day. I can't be a slave to a list.

But making a list of what I've accomplished makes me feel good and sometimes I impress myself. This has turned my idea of getting into a schedule on its head, but it was never a good idea anyway. Some of the things on a schedule don't need to be done once they come around, and sometimes they need to be done sooner. With this new system of making a list after I've done things, I can just look around and see what needs to be done and then do it. Like today I decided to put together Ivey's farm jumperoo. She isn't quite big enough, but she still likes it. Suzi likes it too because it gets Ivey up where she can play with her. She had a good time showing Ivey how all the stuff on the jumperoo works.

The girls have been so cooperative all week! Our house is cleaner than usual. Right now Ivey is napping and Suzi has asked to watch "Bill" (Beauty and the Beast). Ahhh. This is much better than going back to work.

I love the idea of a 'done it' list. That is really, really fabulous. Any mom of young kids is guaranteed to have a done it list a mile long - total confidence builder!

I need to change the way i do my list also. I love all the new pics. Both babies are beautiful! I cannot believe how much Ivey has grown!

I think that's a brilliant idea.

Oh, and can I just say that I absolutely LOVE your header photo? Gorgeous.