An unplanned indulgent ramble about kids, school, and time to think and create

From the consignment sale...
Peeping chicks for Ivey (Suzi loves them too), 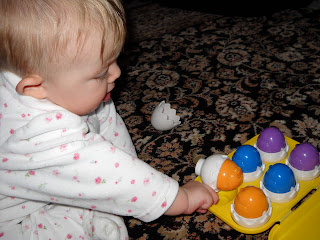 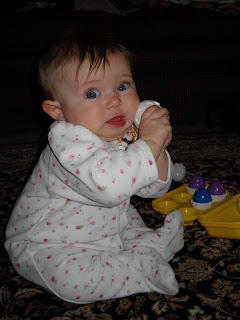 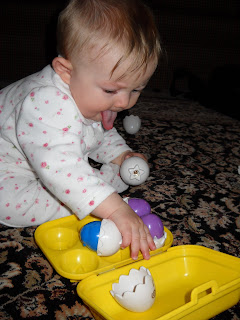 And a new(er) Ergo for Jordy and me. We had one already that we bought used from a friend, but this one is an upgrade. The old one will be out on loan to a friend this summer. We love the new Ergo, but we do not love the overpowering scent of the prior owner's laundry products. What is it with people and faux-flowery scents? Hopefully it will wear off soon. At least it doesn't reek of cigarette smoke. 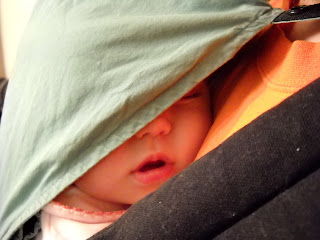 I am having some trouble deciding if I should go to the next sale, which is in early April. I do not need anything. However, if I volunteer I get 70% of my sales rather than 65% and we are selling a nice jogging stroller. And if I volunteer I get to shop early, and if I spend four hours of my life volunteering it'd be a waste not to go to the early sale. It's such a privilege after all. Super marketing plan, isn't it?
P.S. Don't worry, we got Suzi some new toys too. A moon bounce ball to play with in the yard. A couple of new dolls. A pink dinosaur bank she loves to "feed." Swimsuits for this summer. A mini-chalkboard box. Probably some other things I can't remember.
P.P.S. I can see now I reallllly need to stay away from this next sale.
P.P.P.S. Hmm. Well maybe it wouldn't hurt just to drop by the 50% off sale.
Posted by Jenny at 9:00 AM 2 comments Links to this post

New stroller! (plus my thoughts on more kids)

We (my friend Megan and I) waited. We tagged. We sat outside in line, and fortunately it was sunny and warm. Then we shopped the consignment sale, and here is one of my two favorite finds... 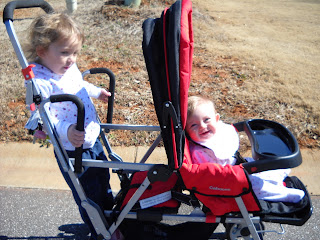 I'd hoped to find an inexpensive umbrella stroller, because the latch on ours broke and it's no longer safe. Instead, I found this one. It's a Joovy Caboose.
Baby sister can ride in front (it also can hold a car seat carrier, but we don't use one), 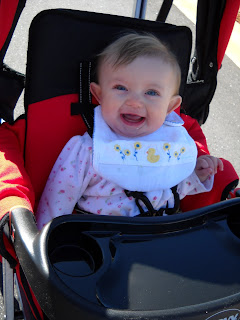 And big sister can stand on the back. 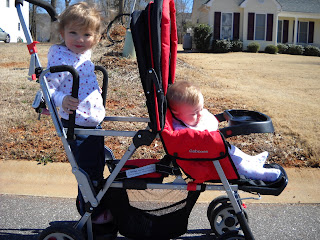 Or if she prefers, she can sit. 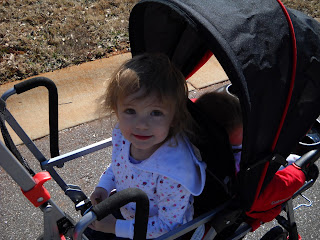 Sometimes she jumps off and runs around looking for rocks! 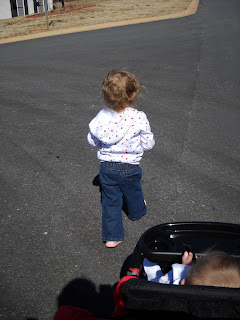 While we almost always favor baby carriers, sometimes a stroller is nice. I like taking longish walks around the neighborhood with this one. Also, trying on clothes while shopping is pretty impossible while babywearing. This stroller is way lighter and easier to fold/unfold than our old one. Our old one is a jogging stroller and we'll be selling it at the next sale.
The one other reason I'm glad to have this stroller is that I can see it being useful for three kids. No. I'm definitely not pregnant, and I have to admit I am glad. But we do want more kids, and I can envision myself pushing Ivey and Suzi in this stroller and carrying baby #3 in a wrap. Someday, you know? Am I the only mom who fantasizes this way?
Posted by Jenny at 9:10 PM 4 comments Links to this post

Just a step or two down the hall 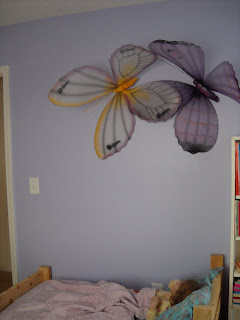 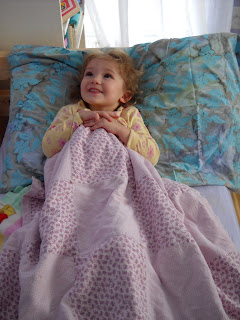 After talking about it for months, we finally moved Suzi to her own room a few weeks ago. (These pictures are from the end of January, when we first showed her the new setup.) The room was already a playroom, as I organized it during my pregnancy with Ivey. All we had to do was swap the coloring table for her little bed and tack the bookshelf to the wall for safety. Then we put the table in our craft/catch-all room, straightened up a bit, and we were done. She was excited about the move; we wouldn't have done it otherwise. I was perfectly satisfied with having her in our room, because her sleeping habits were fine. She wasn't needy or overly dependent the way some people think children who are parented this way are. It's a myth.
The first experience in her new room was an afternoon nap, but I'm not sure she slept at all. The "nap" ended when she yelled for Daddy. He went up to see what was wrong and she was trying to reach a book that had fallen behind her bed. Jordan said that if she hadn't dropped the book (which she pulled off the bookshelf behind her) she'd have been up there reading in bed. Kind of cute to think about! Jordan used to read in bed when he was supposed to be sleeping, and so his parents wouldn't hear him switch the lamp off he'd unscrew the bulb instead.
The first night, Jordan tried to put Suzi to bed as usual, but it wasn't going well. When I heard her crying I offered to go talk to her. It took an extra bedtime story, another doll ("Rosie," her Raggedy Ann made by Grandma), lots of hugs, and just the right setup of night-lights to appease her. She has a Twilight Turtle, a stuffed turtle that projects stars onto the walls and ceiling, but it has to be really dark to see them. The darkness made her a little nervous, so she told me to put her Betty Butterfly and big tiger up against the bed (to stand guard).
I was a little nervous at first. Now that it's been a few weeks, I am okay with it. Jordan and I are just a step or two down the hall from her. She does call for us a lot more often now, and we do have a more intricate nighttime routine, which includes but is not limited to getting her tissue (in case her nose runs), making a potty run, brushing her teeth, getting the three or four stuffed animals/toys she requests, turning her stars on (the Twilight Turtle), letting her kiss and hug all three of us at least once, and always, always reading "In the Night Kitchen." We must read this book or the evening can't continue. And she has it memorized.
In a couple of years it'll be Ivey moving into that room, but she'll be moving in with her big sister. Suzi's little arms will comfort her when she's afraid of the dark. We'll probably get them a double bed, maybe even bunk beds with a double bed on the bottom once they're old enough. They can cuddle and play and laugh and share clothes and argue and do all the other things I'd imagine sisters do when they share a room.
It's going to be beautiful. It already is beautiful.
Posted by Jenny at 8:46 AM 1 comments Links to this post

When you're alone, alone in the world

A few minutes ago, Suzi was prancing wildly around the living room on her horse on a stick. Jordan and I were unfortunately forced to take the horse away after she proved unable to keep the long stick out of her baby sister's face. Eardrum-shattering fit-pitching ensued. Jordan picked Suzi up and tried to comfort her, but this only made her angrier. She shouted at him to PUT HER DOWN AND LEAVE HER ALOOONE!!! I gently asked if she might like to be alone for a little while, and she said yes. I told her if she wanted she could go up to her room (*not* as a go-to-your-room punishment; just for a chance to calm down). She agreed, hung her head, and trudged up the stairs, ruefully singing "when you're alone, alone in the wuld, when you're alone in the wuuuuld," a tune from one of our favorite Christmas specials, Mr. Magoo's Christmas Carol.
(And in case you were worried, she came back down the stairs, smiling again, in like 30 seconds.)
Posted by Jenny at 6:31 PM 2 comments Links to this post

Hand to the Princess Awawa 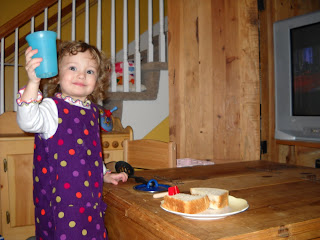 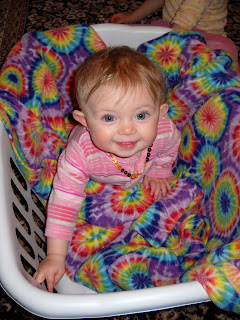 Unrelated picture from today. Found a new way to keep her out of trouble!
If I had to describe our attempts at feeding Ivey solids in three words or less, it's been gaggy. Clunky. Confusing.
Food #1: Avocado. We started out with small strips which I hoped she'd pick up on her own. I got just a little bit on my finger and put it in her mouth to give her the idea, but after a little while she gagged. Gagging scares me; I'm sorry, but it does. We sort of mashed it up on the tray a bit and she had a great time rubbing it all over the highchair and herself. A little bit did get into her mouth.
Food #2: Sweet potatoes. I cooked one in the microwave and cut it into grabbable pieces. She was into this (after I dorkily demonstrated what she should do). A little sliver found its way into her mouth and she began to chew. Then it got too far back. More gagging and this time we got two little puddles of milk-puke to go with it. Apparently this gagging is normal when starting kids on solids, but I'd rather avoid it.
Food #3: Egg yolk. I thought, maybe our problem is that we should try a mushed up food just to start, and then we'll go to finger foods later. I boiled an egg and added just a little breastmilk because it was kind of dry, and mashed it up. When I approached her with the spoon, she indicated she'd like to feel the food a bit before eating it. I let her squish it on the tray and play in it a while, and then I put just a little on the inside of her mouth. She gave me this look as if to say Mama, why do I have to eat this weird stuff when you have two perfectly good boobies right there? But you don't have to take my word for it. I told her not to worry about it and gave her what she really wanted. Here is her face a little after our nursing session: 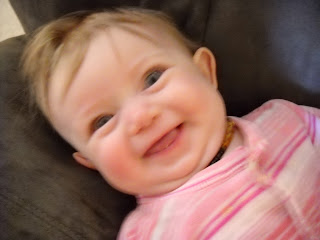 Ivey, as our midwife Carey suggested the other day, is a "booboo baby." Other people are looking forward to the day she eats solid food, but she doesn't really care, I don't think. Yes, she has seemed curious before at the table, but when actually presented with an opportunity to eat food, she is unenthusiastic.
I remain unrushed. I am enjoying being able to eat huge amounts of food without gaining weight, the absence of a monthly visitor, dirty diapers that smell like butter and don't require scraping or spraying, and the convenience of solely breastfeeding. I may be a lousy cook, but I can make milk and it turns out perfect every time!
Next, I think we'll give bananas a go. As Amber mentioned, I think I'll get them sort of mushy and then pile them on the tray for her to fling around the room or gobble up, whichever she prefers. If that doesn't work, we'll wait a week or two and start over again.
Anybody else out there who took longer than usual to get going with solids?
Posted by Jenny at 6:35 PM 6 comments Links to this post