Beautiful day for a field trip! 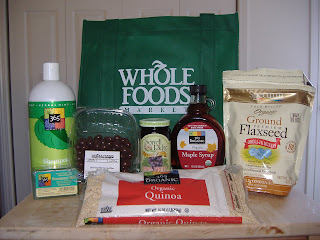 It's probably weird to take pictures of your groceries but I am excited about discovering Whole Foods. Jordan, Suzi and I spent Saturday morning in Greenville. I had been hearing so much about Whole Foods and wanted to go, so I convinced Jordan it was worth the trip. We came out from under our rock and drove 45 minutes or so to get there.

If anything is worth a trip to Greenville, this is. I expected to find organic foods and other things not usually found in Wal-Mart, but the shopping experience itself is so different. Outside the front door there are plants for sale; when you go through the doors you are hit not with a traditional stale grocery store smell, but rather with the aroma of spices and--well, I'm not exactly sure what it is, but it smells good! The food is not as expensive as I'd expected. I'd been wanting to try some quinoa, which Julie said was good, and I think it cost about the same as grits.

You know those cheap, impulse buy pick-me-up items you see in Wal-Mart? Change purses, cheap jewelry, little toys. They don't have that at Whole Foods. Instead, they sell unique items that are, for instance, handmade in Africa and bought for a fair price rather than made in sweatshops. Didn't buy any but I wanted to. Then I saw the bath product section. I found a big bottle of mint shampoo, which I'd been searching for for years and couldn't even find online, for only $3. I got the soap to go with it. We also bought five of their big 99 cent shopping bags--and they even credit you ten cents per bag for not using paper or plastic. I'm going to start using them every time I shop because those plastic bags just clutter up my life!

When we got home I cooked some quinoa, and it was so good! I like it better than grits and that is saying something. It is also way easier to cook than grits. I tried to feed it to Suzi but she didn't like it; it's too grainy for her yet. I can see now we're going to have to start making a trip to Greenville once a month just to go to Whole Foods.

We also went to a craft store and bought Suzi some plain wooden eggs after she so enjoyed Jackson's the other day. Then I dyed them pretty colors. She loves them! Funny, because this is a toy that cost less than four bucks. 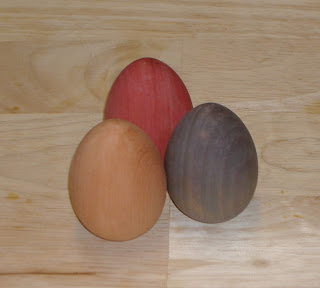 Today: Church and hopefully (real) Easter egg dyeing. I know it's a bit early but last year we waited around and ended up being too busy to do it. We have to dye eggs this year; it's Suzi's first Easter!
Posted by Jenny at 3:25 AM

Next time you have a day off I'd love to go to Whole Foods with you. I'll bet I could get some of the things I need for baking. Suzi's wooden eggs are wonderful! What kind of dye did you use?

the first time i went into whole foods i stood mouth agape in the produce section... the beautiful arrangements, the smells, the order, selection... so obviously blown away that an employee whispered to me, "it's your first time, isn't it?" and giggled.
agreed... love, love, love the occasional field trip to whole foods. it makes the return to an ordinary supermarket quite the bummer.

I went to Whole Foods for my Lactation Educator class last fall. It has some unique items and I love the all natural choclate covered nuts I got there.

I've always wanted to go in there but have never had time while we're actually in Greenville (or been able to convince Jeff to go with me!) I guess Elaina and I could on a field trip by ourselves one day if we wanted to! Another store you might like (but it's even further away!) is Earth Fare....it's the same type of store only not as big...but it's down on Pelham Road in Greenville. Have you tried the quinoa yet? Have you been able to find it anywhere besides Whole Foods? I've looked for it but can't seem to find it. OH, and my main reason for commenting on your post :-P Do you know of anywhere around here that sells playsilks? Elaina has a nasty old fleece blanket she plays with and I thought one of those would be fun for her to have. I could order it but I'm an instant gratification type of person!

I love Whole Foods! It is fabulous! and I am glad to see a picture of your groceries as I was thinking of doing that... cause I would like to look back one day and say, "Wow I remember buying that all the time for True!"