January Spending Freeze, Day 3: Using up the fridge treasures (and saving $$$ on groceries)

As I mentioned on Day 1, I have a bad habit of forgetting about items in my fridge (or anywhere in the kitchen, but it's usually the fridge) until they spoil, and have to be thrown out.  I feel so terrible when that happens!  So the first thing I knew I needed to do during this spending freeze was to find those things and figure out how to use them.  Here's what I have found so far, and what we did with it all.

1) A turkey carcass.  We boiled this, simmered it for about a day, then strained it and threw in some small pieces of turkey that were left on the bones.  I make turkey noodle soup with some of it--easy lunch, plus leftovers for dinner!  The rest I froze to be used later.

2) Rotel/sausage dip.  I reminded my husband to eat it, and he did.  Easy! 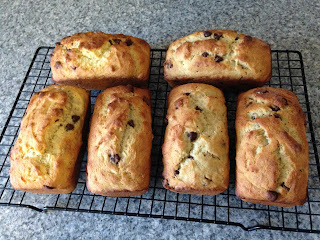 3) Overripe bananas.  This is something we waste regularly, and I need to quit.  They are so easy to save and use that there's no excuse not to!  I used about six bananas to make these mini-loaves of gluten-free banana chocolate chip bread.  I wrapped them in plastic while they were still warm (it forces moisture back into the bread) and am storing them in the fridge to be used for breakfast and snacks.  There were still several bananas left, so I peeled those, broke them into pieces, and froze them.  I'll tell you what I used them for later. 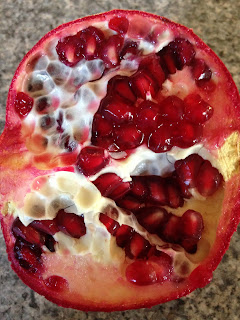 4) A whole pomegranate.  This one must have gotten shoved to the back, or we would have eaten it sooner.  The outside was dry and hard, which worried me a little, but it was still beautiful on the inside!  The kids love these, so they had some with their lunch.  We'll eat the rest soon. 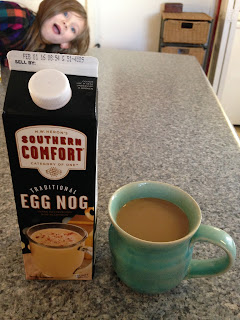 Ivey decided to photobomb, eggnog mustache and all!


5) Eggnog.  I didn't like this when I was a child, so I hadn't tried any in a decade or two.  A few weeks ago I thought I'd try it again, and bought myself a carton.  Turns out I was right the first time.  Even with alcohol added, it is much too sweet and thick for me!  I started googling for ways to use it in a recipe, and found that it can be used as coffee creamer.  Alcohol optional--it's good either way.  The kids didn't seem to mind drinking it plain, but I don't think they'd be able to drink much of it.  Either way, I'm happy it's getting used up--and since coffee creamer is NOT an essential grocery item and I can't buy more until February, it's nice to have a little bit extra! 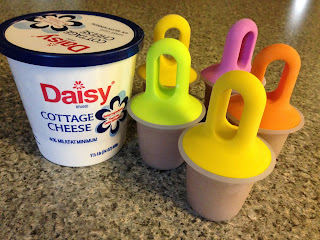 6) Cottage cheese.  After years of thinking it was gross, one day I was out grocery shopping and had a strange urge to buy some.  I'm so glad I did, because cottage cheese is a delightful, affordable, protein-packed food that can be eaten lots of different ways.  I enjoy having it with vegetables, chips (especially spicy ones) or crackers.  I also eat it with quinoa or dirty rice.  At least two of my kids will even eat it!  The problem was that I accidentally bought extra cottage cheese, and this was a nearly full forgotten container that didn't have much time left!  So, I decided to use some of it to make "milkshake" smoothies for the kids.  This is where the frozen bananas come in, too.  I didn't measure anything, but here's about what I used:

I threw it all in the Ninja, blended until it was smooth, tasted it, and adjusted the honey and milk until it was the right flavor and consistency.  When it was done and I tasted it, I was worried the kids wouldn't like it.  I think using sugar instead of honey would make it taste more like a conventional milkshake.  But I served it to them and they enjoyed it!  The lumpy bits were pulverized, making the cottage cheese unnoticeable as an ingredient.  There was some left over, so I poured it into these little popsicle molds my mom gave me.  The kids are already asking when they will get to eat them.

As for the bit of cottage cheese left in the container, my husband plans to mix it with hot sauce and eat it with chips.  Such a versatile fridge treasure! 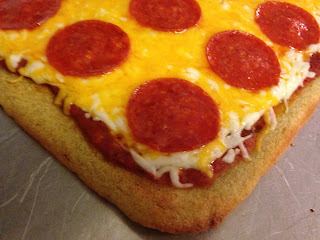 7) Spaghetti sauce.  We opened a new jar of spaghetti sauce a few days ago when we made quinoa crust pizza.  It was lovely.  Next time I'll make the crust a little thinner.

Sometimes when we make pizza and use just a little spaghetti sauce from a jar, the rest of it gets left for too long, or we can't tell how long it's been left, and it goes to waste.  Fortunately, we are having spaghetti tonight and will use it all up!

Confession:  We did lose most of a jar of salsa that had been shoved to the back of the fridge for an indeterminate amount of time.  It was just too late for that one.  I'm going to try to do better from now on.  It's amazing how far groceries can be stretched when you're careful to make sure they get used!
Posted by Jenny at 8:00 AM