For Christmas, Suzi's aunt and uncle got her a really cool craft/sewing set.  It includes pre-cut pieces of felt and instructions for projects, along with needles, thread, pins, beads, and more.  She loves it.  Shortly after we returned home from Christmas traveling, she took it up to her room and spent several hours working with it.  She has sewn things before, both with me and independently, but this kit really seemed to get her motivated in a new and powerful way.  When she finally came downstairs, she proudly showed me an adorable little owl she had made all by herself.  "You know," I said, "you can take any fabric, cut it to make anything you want, and then sew it with the tools in your kit!"  Anytime I sew a project and have a bit of fabric left over, I put it in Suzi's fabric bin.  I especially like to give her sweater or t-shirt scraps and fleece, because they do not require hemming--the edges will not unravel.

A few days later we read The Lorax, one of the kids' favorite Dr. Seuss stories, and Suzi was inspired!  She ran up to her room, and a while later presented me with this adorable little guy, crafted from one of her Dad's old t-shirts, two buttons from Grandma, and a couple of felt pieces from her sewing set. 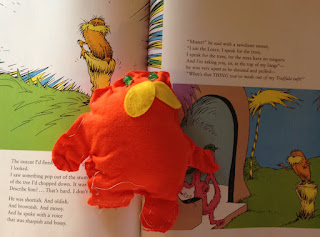 He speaks for the trees.

Ivey wanted to do some sewing too, so I said sure!  Suzi gifted Ivey her old, smaller sewing kit with threads and a little thimble, and I found her a dull needle.  She found a leftover scrap of fleece and made this. 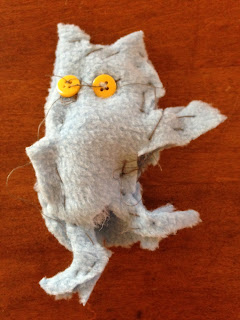 As I was looking around for cashmere sweaters to start a project of my own, I stumbled upon some cashmere scraps I had meant to give away a few months ago.  I had been crafting simple little dolls to sell at craft fairs, but after I decided to give up crafting for profit, I realized I was never going to use up all those little pieces.  I gave the girls one large ziploc bag each of various colorful, soft, fluffy scraps--perfect for small, easy projects.  It's already kept them busy for hours practicing basic hand-sewing skills on their own, which I've always felt is the best way to learn.  They do not want their mother hanging over them, telling them a better way to do this or that, and stopping them from making mistakes they could learn from.  I offer tips and help when requested, and then send them off to enjoy themselves.  There is literally nothing to lose, nothing to waste.  This little pursuit is a spending freeze win for them and for me!
Posted by Jenny at 9:54 AM