Would you let someone borrow your BABY? 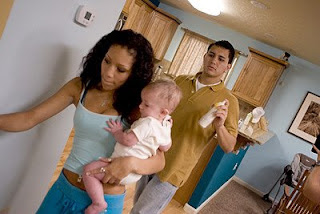 (And the scariest mother award goes to... Alecia, pictured above. That girl would not be getting my baby. No, no, no, no, no. It made my hands sweaty just watching her.)

That's what NBC asked five couples to do. What's more, they were loaning them to teenagers. I wasn't going to blog about this, but after reading Amy's well-researched article my comment to her was so long I decided to blog it after all.

Without a second thought, Jordan and I eagerly tuned in to this show the other night. What a cute idea! But wait a minute. These people are actually handing over their babies? To strangers? For THREE DAYS? I have three problems with this.

1) Babies are people, and sensitive, impressionable people at that. They should be treated as such.

2) It's unfair to the teens. Of course it's going to be harder than hell to "parent" these babies; they want their real moms and dads! Even so, I'd like to point out that after two years of marriage and a bachelor's degree (in psychology), I made some of the same mistakes these teens made. That's what happens when you're learning to be a parent, because you can't learn parenting from a book. You can only learn it from your baby.

3) Every baby is parented differently, so these cookie-cutter homes NBC set up, with cribs and bottles and other detached-parenting paraphernalia, are not going to work for every baby. My daughter would've had a FIT. We cosleep, but they wouldn't dare put that on TV, seeing as how society is so hung up on it being dangerous. These teens could have done a much better job if they'd been given a manual specific to each baby. Is the baby Ferberized or does he cosleep? Does he like homemade baby food or is the storebought stuff okay? A breastfed baby is going to make an automatic failure of the aspiring teen mom, because no one can meet that need but the mother. It makes me want to cry to imagine Suzi in that situation. NBC could have selected only formula-fed crib-sleepers for this experiment to level the playing field, seeing as how they probably wouldn't have allowed them to cosleep and certainly not to breastfeed. That also would've made it a ton easier on the babies. I believe they chose not to do this because they wanted to, at whatever cost, drive home their point that teens make lousy parents, and ensure there was plenty of conflict on the show to keep viewers interested.

Instead of a cutesy I-told-you-so farce, I'd love to see real live teen parents making it work with their own biological children. Then we could really get down to brass tacks. Did they breastfeed? Cosleep? How did the birth go? This would come closer to teaching teens (the viewers) what's involved in parenting. Who knows? Perhaps there could be a role model or two in the rough.
Posted by Jenny at 12:44 PM

Oh Jenny, this cloth diapering thing...we found a store in Asheville (on the way to my parents) that sells cloth diapers in the store...all the major brands...and bought a few of the ones that are inserts with cover and what not. I must have a wrong shaped baby! I've put Elaina in them several times and she's peed out of them, no kidding, in less than 30 min...and when I take them off...they're only wet a little in the center...and directly over the leg stretchies. Good thing we brought lots of clothes and can use the washer! I might need some help with this b/c I really want to make it work! (and yes, I finally got to deal with the poopies...interesting I tell ya!)

I thought this show would be not so good. I haven't bothered to watch it and now I know from your post that I will not waste my time. Your post makes perfect sense! Kudos to you!