It's been incredibly busy over here lately!  We've been homeschooling, doing a little fall cleaning, and participating in various activities, like our new homeschool co-op!  Also, my first season as a rostered skater with Upstate Roller Girl Evolution just ended Saturday.  I wrote on the URGE blog yesterday about getting back into running.  Other than that, we've been decorating for Halloween!  We're having our yearly Halloween party soon, so there are a lot of decorations going up right now.  I thought I'd share about one idea I tested out tonight. 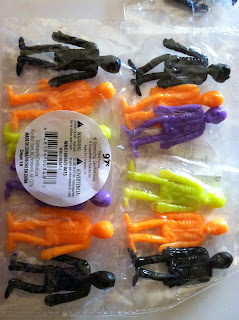 Have you seen these things?  They're non-edible stretchy, gummy skeletons.  I found them at Wal-Mart.  Not every Wal-Mart has them, so if you see some at yours, lucky you!  I bought some for the kids, and it didn't take six-year-old Suzi long at all to discover that they stick to the ceiling.  If you just toss them up there, they stick good and you have to pull them off.  The kids threw all their skeletons up to the ceiling and laughed like hyenas.  Anyway, we noticed they don't really hurt the ceiling, aside from perhaps pulling off a tiny bit of the "popcorn."  (You might want to test out an inconspicuous spot on your ceiling, just in case.)  So I thought, wouldn't they be a great way to hang streamers?! 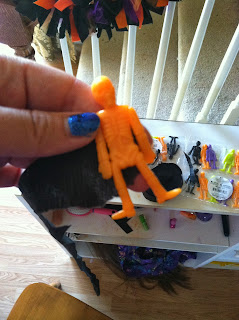 I got a couple of rolls of black crepe paper, stuck a skeleton on like so... 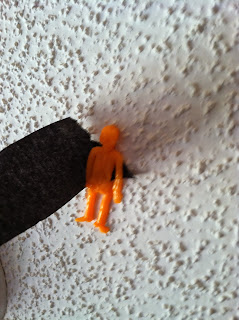 And then stuck it to the ceiling! 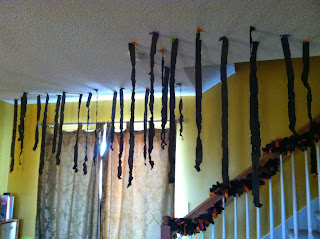 I repeated that a few times.  For a finishing touch, I crumpled each streamer up toward the ceiling and then let it fall back down.  Done!  As you probably gathered, it cost less than $10 and only took about 15 minutes to do this.  Suzi the tiny Halloween guru says it's "ah-mazing!" 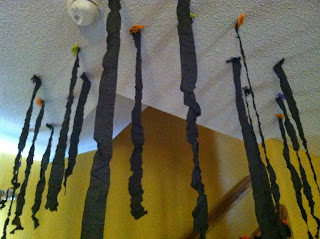 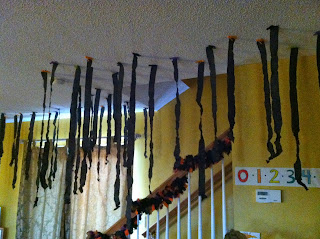 Glad to have that done!  Now I'm off to watch The Haunted Mansion with the family and decorate the rest of the house!
Posted by Jenny at 7:52 PM 0 comments Links to this post