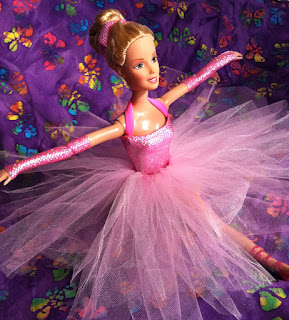 I had this little problem.

Ivey, 3, wanted a Barbie for Christmas.  I knew how this would end.  We'd buy a new Barbie, she'd take all the clothes off and get the hair snarled into one disgusting dreadlock, the Barbie would fall into the bowels of a toy bin, and we'd repeat this process in a few months.  I don't judge her for wanting a Barbie, and I don't mind having Barbies.  I had a ball playing with them when I was a little girl.  I do mind spending money on a brand-new Barbie just as we place our old, tangled, naked ones into the Goodwill donation box.

I hate that Barbies and many other toys have become disposable.  I hate the waste.  I hate knowing that thousands of Barbies are trickling from Wal-Mart to homes to Goodwill to landfills while we continue to buy more shiny new Barbies.  They don't stay shiny and new for five minutes!  I wanted to stop the cycle.

So here is what happened.  The other day I went to a local holiday consignment sale.  I knew Ivey wanted a Barbie, so that was one of the things I planned to look at.  There were a few expensive collector's Barbies new in the box.  Then I saw this unusual-looking big Barbie.  I thought Ivey would like her.  It looked like her hair could probably be brushed out and restyled, and she was only $2.  She was also a jointed, posable ballerina, and Ivey had requested a "dancing doll."  So I bought her.

Upon closer inspection after I got home, I realized the Barbie's cheap, flimsy clothes were ripped and stained.  I knew they wouldn't survive being washed.  Her hair was really tangled, and she smelled a bit smoky.  Yuck.  After a bit of research, I learned that she was one of these fancy dancers, separated from all her high-tech accessories.  (Please note the crappy reviews.  Less is more, toy designers!)  I thought about throwing her in the trash and ordering the plain, inexpensive ballerina Barbie I'd seen on Amazon, but it'd been a hard day and I was in need of a fun project.

I asked Jordan to watch the kids for "a few minutes" and got to work.  First I had to remove all the tiny rubber bands--you know, the ones they use to style the hair so it looks impeccable on the store shelf but then, after your child touches it, never ever looks good again?  I tried brushing her hair with an oversized Barbie brush, but it was too tangled.  To help things along, I wet it and smoothed some rich peppermint lotion I happened to have into it.  I brushed and brushed, starting at the ends and working my way up.  It took a long time.  Then I washed it with a small amount of gentle bar soap and conditioned it again with lotion before rinsing it out.  I brushed it several more times between these steps.

Barbie had a few scuff marks and dings on her face and body, and I thought they might be permanent, but they came right off with a Norwex cloth and water!  I love Norwex.

I really wish I'd taken a before shot of this 1998 Barbie in all her tangled-up, dingy, raggedy glory, but the makeover was honestly a last-ditch effort and I didn't know it would work!  So here she is after her day at the spa, leaning against my serger and telling me her troubles while I sew her a new outfit.  If you look closely, you can probably see that her old dress just wouldn't do. 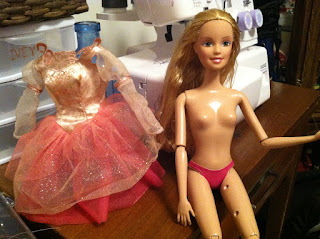 "I mean, seriously!  After all that tireless dancing and smiling I did, they put a $2 tag on me and threw me in a box!  Can you believe that?  Really hurt my feelings.  Glad I met you, though.  And by the way--pink is my favorite color!"

Well, anyway, pink is one of Ivey's favorite colors and was the primary color worn by the Barbie she pointed out and asked for.  It was a picture in a National Geographic!  I give my kids Nat Geo to look at, and they pinpoint the one plastic toy pictured in a story and ask for it.  Funny, huh?  Anyway, I had this delightful hot pink sparkly remnant that just spoke to me in the fabric store about four years ago.  It was stretchy and perfect!  I certainly didn't have a pattern, but all I needed was a simple leotard, so I laid Barbie on the wrong side of the fabric and traced around her body with a pencil.  Leaving a bit of room for seam allowance and to hem the top edge, I came up with this: 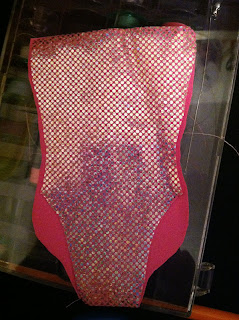 I sewed right sides together, except for the crotch, which I left open, 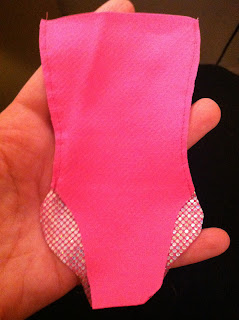 And I tried it on her.  She really liked how it was coming along. 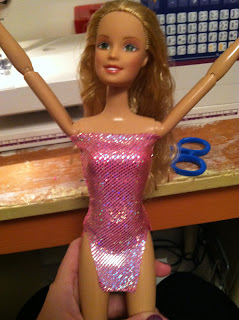 I decided that I didn't really need to trim the crotch and sewed it closed.  Because this was a stretchy, non-raveling fabric, I didn't have to hem the leg holes.  I knew they would be hidden under the skirt I was about to make, anyway. 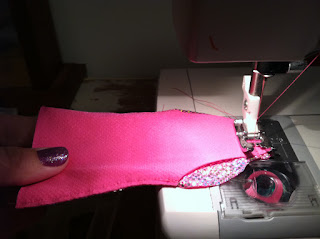 I did hem the top edge, though, to give it a more finished look.  This is how it came out.  Easier than I thought! 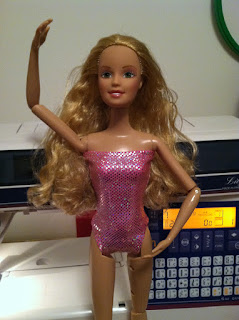 I thought it needed some sort of strap(s) to secure it at the shoulder.  To make things simpler, I decided on one halter-style strap made out of a tube of some of the plain hot pink fabric on the selvage of that same remnant.  It was a little aggravating to turn that tube right side out because I have misplaced my bodkin, but I got it done. 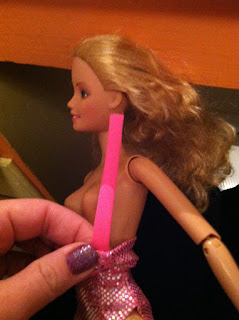 I sewed it to one side just to the front of the side seam, and briefly considered sewing her into the leotard by doing the same thing on the other side, but ended up putting in a snap instead.  Now Ivey can undress her.  And probably will. 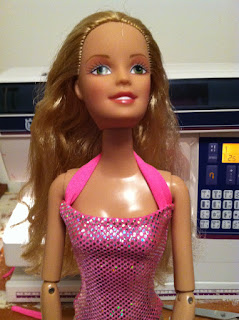 The hardest part was over--now for the skirt!  I already had some tulle left over from Suzi's first birthday party tutu, so I pulled that out.  I tried doing a sewn skirt, but it didn't work out like I wanted at all.  It's tied tutus for me from now on!  I sewed a stretchy band out of another little selvage scrap and slipped it around Barbie's waist. 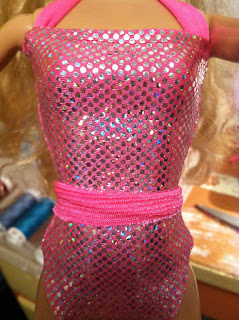 Then I cut some strips of tulle and made the tutu while she wore it!  So easy.  In this picture you can see the rectangular hole where she would've plugged into her dancing stand thingy. 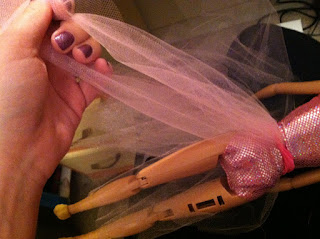 After a few minutes of tying strips on and a quick trim to make it all the same length, her fancy new outfit was done and Barbie was starting to feel fabulous again! 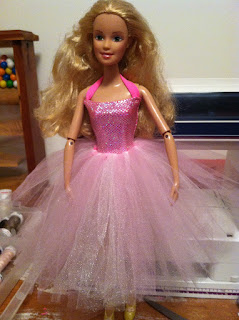 1)  Arm warmers (to cover those joints).  I just made two little tubes out of rectangular scraps and turned them right side out, no hemming necessary. 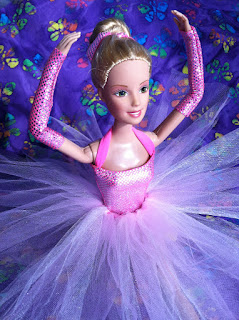 2)  A new hairdo.  I was a little nervous over this.  It's not like I have any Barbie-sized bobby pins, and I'm terrible at hair!  It worked out okay, though.  I pulled back the top and sides and braided it, then parted the rest into two pieces and twisted it around the braid, pulling it into an updo and securing it with one of those tiny plastic bands (same ones I used on my girls' hair).  Then I cut a strip of the hot pink fabric, tied it around the whole thing, and trimmed it. 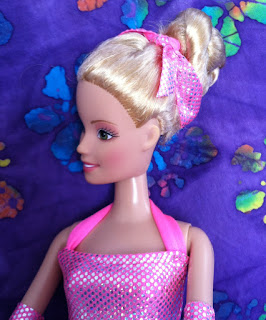 I am sure Ivey will dismantle her 'do, but I can fix this one again!  Ha!


3)  I took some hot pink metallic acrylic paint and a tiny paintbrush and painted her ballet slippers to match. 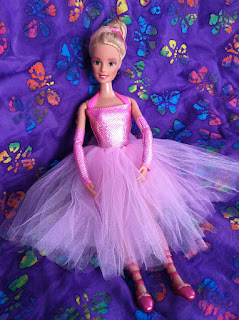 Yeah, I know it all seems a little obsessive, but once I get started on a project it's hard to stop.  This is how I do arts and crafts.  Some people knit, some people quilt, I do random stuff like this!  And I do love the way she turned out.  The best part is that the entire project only cost me the $2 I paid for the Barbie, because all my materials and tools were things I had on hand or were left over from other projects!

The moral of this project:  If you want your child to have a lovingly handmade toy but you're not quite that crafty and don't have enough money to buy handmade, why not make over a toy instead?  It's a fun option that comes in many forms and at varying degrees of difficulty.  Have you ever tried this and have some ideas to share?  I think I'll post again later with some of my ideas for pre-loved toy makeovers!

VERY VERY VERY impressive! Love it! Love that you saved money and a plastic toy from the landfill! Great job- she looks amazing!

You're one awesome mom!...Crystal G.

You are a Barbie miracle worker!

This is awesome! What a great idea. She's gonna love her :-)