What all my babies are up to 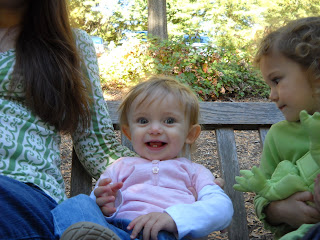 Robin: 18 weeks, 4 days in utero
Ivey: Coming up on 15 months
Suzi: Almost three and a half
This pregnancy is flying by! Our ultrasound should be in a couple of weeks. Hopefully everything will be fine and I hope to find out if it's a boy or a girl. We haven't decided for sure on middle names yet, but it'll be Robin for a girl and Robert has really grown on me for a boy.

We will be tandem nursing this April. Ivey is not going to give it up. She comes up to me and says "mummah?" and gives me a sad face. I used to think she was talking to me, but then I figured out this is how she asks to breastfeed. We know this for sure because she asks one of our friends the same thing at church if she sees her nursing her little baby. Anyway, If I don't give her what she wants she'll start whining and pulling at my shirt. It's like an emergency when she wants to nurse. She gets panicked over it. When she can see I'm getting ready to pick her up and nurse her she giggles and jumps up and down.

Suzi is so theatrical. She puts on "shows" for everyone, singing and dancing like she's in a Broadway musical with a bowl or something on her head for a costume. I'd love for her to be in some plays if she's still into that in a few years. Jordan mentioned, and now we have this silly little fantasy, that someday she might play Toby in a local production of Sweeney Todd. It's the perfect part for her. ("Ladies and gentlemen may I have your attention puh-leeeaase!") But not until she's grown up, of course. It's a dark, dark play. She always wants to play boy parts. My little Suzi, the triple-threat performer. 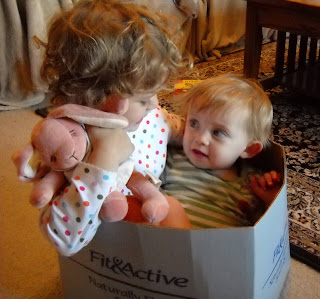 This was Suzi's idea.
Robin is moving around more now. I felt it for the first time at 16 weeks and 5 days, and now there are usually a couple of episodes a day in which I feel movement for several minutes. The other day I was holding Ivey during her nap and Robin was kicking her. 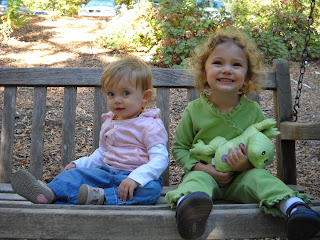 Ivey is talking some now. Her words so far: Hewwo! Bye-bye! Puh-pie! (That's her version of peekaboo.) Ball, more, "gie dat back!" I'm sure there are others she doesn't use as much that I'll remember later, and there are lots of unintelligible sentences spoken. She still uses her pterodactyl screech to communicate frustration for just about any reason. She climbs the stairs and can come back down safely by herself, although we still stay right there with her.

Suzi's drawings are getting really fun now. She loves to draw people. One day she drew me getting angry in the van on our way to church because my cup of water tipped out of the cup holder and got my pants all wet and we had to go home for me to change. Then the other day she drew a picture of our family, and she drew each of us in our favorite color. She even drew a smiling little Baby Robin, who she insists is a girl. Maybe she's right. It wouldn't surprise me too much, considering she knew I was pregnant before anyone else. 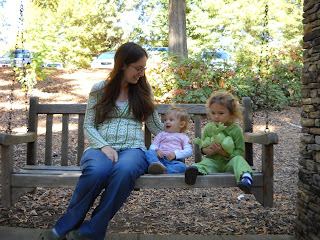 It's quite busy around here, and it's about to get even busier yet, but I love it. I love them all. Not sure what we did before we had them. 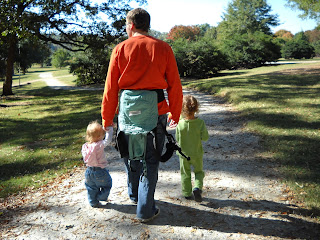