Who says you don't get a trophy? 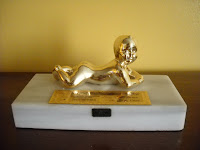 "Honey, they don't give out trophies on the way out of the delivery room!" You've probably heard this before--or at least heard of it.
During a massive decluttering effort at my parents' house, they unearthed this little gem. Yep, that's me and my stats! (I was only 6-13, what?) No, it didn't actually come from the hospital. It was a baby gift from friends who own a trophy shop, but all I could think when I saw it was ha ha! Mama really did get a trophy!
I didn't get an actual trophy for either of my girls' births, but there's a trophy in my heart and battle scars on my... well anyway. I hate the trophy argument because the point isn't recognition from others. The point is that we read, took classes, paid extra for midwives because they were better (with Ivey), waited around over a week after my due date and generally went out of our way to have the gentlest, most wonderful births possible. It's a worthwhile goal and something to feel good about--and it does matter. I have a friend who is having a baby any day now. She's a VBAC mom and definitely deserves a trophy. A big one. Her trophy would feature a pregnant warrior-princess swordfighting with a big troll in OR scrubs. I just pray every day that she will get the birth she's worked so hard and fought for.
Posted by Jenny at 8:00 AM

I love this post. And you're right. It's NOT about the trophy. It's about having the birth that you choose, and being empowered to do so. I wish that more women got to have that.

Good luck to your friend!

How great! I too am bothered by comments like these. However I decided moms DID deserve medals. So I made some and give them to my doula clients! :) http://www.momsdeservemedals.com/