What's going on around here 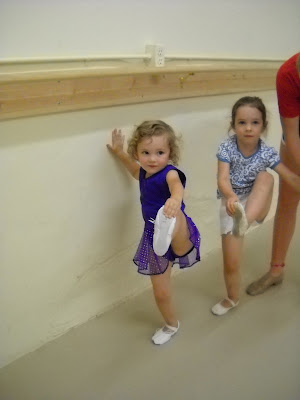 Suzi shows what she learned in her first dance class
I was just looking over my last few posts. When did this become a craft blog? I have been making lots of things recently, but sometimes it's nice to talk about something else. A lot, good and bad, has been going on lately. Here's a quick update.

1) Almost two weeks ago my dad had a stroke. It wasn't a horrible one, and he is okay, but it scared us! He spent a few days in the hospital and a week in rehab, where he worked super hard to get back on his feet and come home ASAP. He is now back and I can hear him, Jordan and my brother Paul in the den playing Wii Sports. We are proud of his hard work in therapy and so happy to have him home!

2) We have been over at my parents' house trying to help them out as much as we can. I reorganized the kitchen and the next morning we had no idea where a couple of things had gone. Oops! At least it looks nice!

3) Daddy got a Wii for Father's Day. My brother Brad (a recreational therapist) insisted it would be good "Wiihab," and he was right. I love it too and I am eating some serious crow now because I previously scoffed at video games as a waste of time. But the Wii Fit is so much fun!

4) I have decided to enter my recycled plastic crafts in some contests/events. The outcome may not always be favorable, but I love making these things and there is no reason to keep making them if there is no one else to enjoy them. I don't expect to make money, but I thought it'd be fun. If I do get rejected I am going to keep going and try harder next time!

5) I have had to take a couple of involuntary breaks from making stuff because I overdid it and my hand got swollen and sore. That was about a week ago and it still hasn't gone completely back to normal. Cutting tough plastic with regular scissors probably isn't too smart. I want some of those superscissors that can cut through shoes and pennies. I used to wonder who could possibly need those things, and now I need them!

6) Ivey's Uncle Paul came up with a great new nickname for her: the pterodactyl. The name refers to the ear-splitting squawk she lets loose anytime she doesn't get what she wants, especially food. AAAAAWK!

7) Elimination communication with Ivey is going okay, and if you saw her dirty diapers as of late you'd understand my motivation to get better at it. She has started eating lots of different foods (watermelon, cantaloupe, beans, bread, Cheerios, cheese) so her poops have fully transitioned and are no longer of the harmless breastmilk variety. A poop in the potty is cause for major celebration.

8) Suzi is taking summer dance lessons and loves them. I think we may enroll her for a full class in the fall. She is also showing lots of interest in reading letters off of signs and other things she sees (although she can't tell what the words are yet). Soon it will be time to get a little more serious about homeschooling!

9) Jordan and I paid off our van yesterday! Next month will be three years since we bought it, and we paid it off a couple of years earlier than we had to. We are so excited to have that behind us, and we are hoping the van lasts us a really long time.

Okay, I think we are caught up. Now I am going to play some Wii, watch the new Alice in Wonderland, and possibly scavenge for craft supplies later. Have a good weekend!
Posted by Jenny at 2:55 PM

I'm so sorry to hear about your dad. And I'm glad that he's on the road to recovery.

And a big WOOHOO on the van!

I'm sorry about your dad. I know how stressful that is!

I love your crafts- good luck with entering them- I'm sure you'll do great.

I too was a big opponent of video games...until Wii came along. It is so different and I don't feel bad if the kids play because they are still active!