What should I put on my iPod? 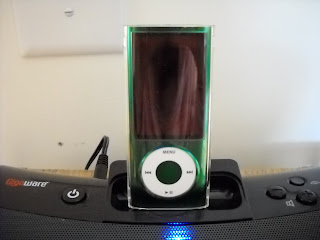 My sweet mom got me just what I wanted for Christmas: this pretty little green iPod. When these things originally came out, what, six or seven years ago? I scoffed at them. No way would I ever buy something so expensive and frivolous. I was totally cool with my portable CD player. But over the years I warmed up to the idea of having an iPod, and their prices cooled down, and now I have one. I'd never actually held one, so when I got it and removed it from the packaging, it scared me how small it was. So thin! It was like holding a new baby. I carefully placed it back in the box and Jordan said oh, don't worry, you won't hurt it. (He has an iPod Touch for work, which he uses for email and stuff.) He kept trying to get me to put it in my pocket but I wouldn't until I had a case for it. Even now I don't like doing that for fear I'll forget it's in there and wash it.
I got an FM tuner for it so I can listen to it in the car, and also speakers (pictured) so I can listen to it in the kitchen without it waking any children who might be napping in the living room. There was also an armband with the case.
But now I'm stumped, because I can't think of any more music I want to download. What do you suggest? What I really need is some fast-paced music to organize by. Other stuff too, but mostly that, because I most often listen to music when I'm cleaning/working. So, please, even if you are normally just a lurker, de-lurk and tell me what to put on my iPod. Thanks!
Posted by Jenny at 6:33 AM

I like Il divo -a guy group with a very classical romantic sound. Raffi would be good in the car that will keep you and the girls singing.I also like STeve Green,Micheal Card and can tolerate Cutless-Strong Tower

Amazon has a free mp3 download section with lots of good choices.

My sister just got a chip that goes in her shoe and keeps her pace/distance/stats when she runs via her ipod. Very cool feature.

I have a lot of Clemson Tiger Band music on mine that I use as part of my running mix. Of course, I'm biased since I was a member of Tiger Band for 5 years. Amazon is a good place to look too. They always have a daily deal. And I price compare them to iTunes, sometimes they are cheaper. Oh, and iTunes has a new free song every week (not always my taste in music, but hey, it's free).

You can also convert any CD you have with iTunes, if you have music you like and have already paid for it. No sense buying it all over again!

Try some relient k. You could put your Bible on there, too.

For fast paced, I really like Linkin' Park. I can't listen to their CD in my car because it's music to get a speeding ticket by. I particularly like the Meteora and Hybrid Theory albums. A fun idea is to download some 50's and 60's songs - you can clean or dance silly with your girls to them. Another good one is Will Hoge's Blackbird on a Lonely Wire album. Someone I really enjoy playing in the background at night while I'm piddling around the house and my kids are resting is Norah Jones -- Feels Like Today is my favorite album there. I also have a best-of CD of Louis Armstrong and Ella Fitzgerald that's real soothing to listen to.