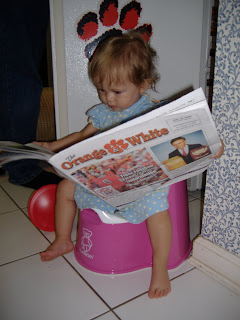 August 2008, 15 months old. She was just playing around at this point.

The other day, on our way home from Jordan's parents' house, Suzi said something alarming.
Suzi: I need my diaper change!
Me: You're not wearing a diaper. What do you mean.
It could have been... interesting, but it wasn't. It turns out she'd spilled a few drops of chocolate milk in her car seat, and just had to pee. She hadn't actually done it yet.
Bless her heart, she's spoiled us. A lot of parents have to hound their toddlers about using the potty every hour or two. We, on the other hand, rarely bring it up because when we do she just looks at us, confused, and says "no, I don't have to pee pee." We've gotten so used to her telling us when she has to go that we don't worry about it anymore. So here's our idiot parent confession of the week: We let her go way too long. We totally deserved a puddle. Instead, we got a good scare, felt really bad, and stopped right away for a potty break.
We are both so thankful for how quickly Suzi learned to use the potty. We know it was a gift from God and probably not too much due to our superb parenting skills. Still, there were some things that seemed to help. It's important to note that some of these things are great for a toddler just learning to use the potty, but not for elimination communication (EC) with an infant, and would also likely be obsolete for a toddler who has already been exposed to EC as an infant. We didn't do EC with Suzi, so I have no insight on that subject yet. Anyway, here they are:
1) Prudence the Potty Doll, and the DVD (Once Upon a Potty) to go with her. If you have a boy, you want Joshua instead. We had the book as well, but the DVD kept Suzi's attention much better. It's only a few minutes long. "I wanna watch Proonce!" she would say. There was also a "potty song" on the DVD, which I found annoying, but Suzi enjoyed. Sometimes, when Suzi seemed totally turned off to the idea of using the potty, I could turn on the DVD or get out the Prudence doll and she would sit down and cooperate. After watching the DVD, she liked to take Prudence's diaper off and sit her on her little toy potty. I think it helped her wrap her brain around the concept. It's a pretty wild idea to a kid who's known nothing but diapers for two years! 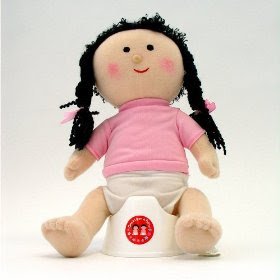 2) Cloth diapers. Cloth diapered babies have been known to potty months sooner than babies in disposable diapers, probably because they can better feel when they're wet. There are special disposable training pants you can buy that also allow a child to feel when he's wet, but I doubt they'd be as effective. Think about it: When you buy your toddler these "cool alert" diapers, he will only begin making the connection between pee release and that wet feeling at a time when you are already wanting him to be using the potty. When you cloth diaper, your child will be familiar with that feeling from the get-go. No wonder it's faster! We thought about buying Suzi some cloth training pants, but by the time she was big enough to wear most of them, she was practically done learning. (She's little.) We did just fine with our Bumkins and Bumgenius diapers. She wore them full-time just as she always had, and we started encouraging her to use the potty. She got better and better at it, and eventually we realized she was going full days without wetting. Then we got her some underwear. Now she only wears a cloth diaper at bedtime, but she has done so well with staying dry through the night that we are thinking of discontinuing that as well. We have gotten our money's worth out of our cloth diapers!
3) Elmo's Potty Time DVD. My brother and his fiance gave Suzi this for Christmas when she was 18 months old. We turned it on right away and she watched it with an adorably serious expression. It's a long DVD, but she took it all in, carefully considering the benefits of what Elmo was proposing. It was this DVD that prompted her first pee pee in the potty. Although this DVD is much longer than the Prudence one, I'd definitely recommend it, if only to plant the seed of thought in your child's mind. The more your child loves Elmo, the more effective this will probably be.
4) Baby Bjorn potty seat and toilet trainer. Not wild about their baby carriers, but love their potty-training stuff! We started with the stand-alone potty seat, because Suzi didn't feel secure sitting on the toilet. Also, the stand-alone potty allowed her to watch her Prudence DVD while she sat and tried. Most importantly, I didn't want a potty with a bunch of cracks and crevices to get dirty. I didn't want something that sang a song or put on a show. I just wanted a simple, easy-to-clean, durable potty, and that's what we got. It also comes up a little higher in the front, which is great for boys (and girls, as we learned!) who like to spray up and over the seat. Later, when Suzi had the technique down and no longer needed to watch Prudence when she went, we easily transitioned her to the toilet trainer--a seat that goes on top of the adult toilet. It sits lower than most other seats, and it adjusts with a dial to fit a smaller or larger toilet seat. It is more expensive than other brands, but worth the money. It's most effective in conjunction with a little stool so your child's feet aren't left dangling. Baby Bjorn makes one of those, too. 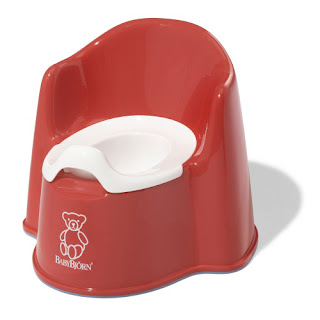 5) The Potette Plus. Be sure to get the plus and not just the regular Potette. The Plus will allow you to use the seat as a freestanding potty and also as a portable seat on a toilet. Once your child is successfully pottying at home, it can be a challenge to keep things going while out and about. Use this seat on top of a public toilet and your child will have a safe, familiar place to sit and clean handles to hold (the legs, which fold out). It comes in a plastic drawstring bag so you don't have the seat touching the other things in your diaper bag. And yes, it is small enough to fit. I love it. 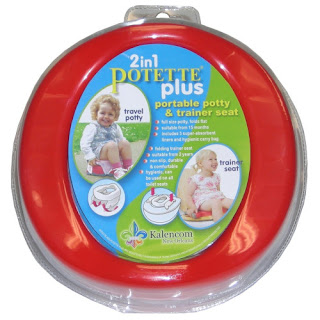 This time around, we are hoping to start elimination communication. We haven't started it yet, mostly because we don't know quite where to start, but I will be reading about it and getting things rolling soon. We already have Early-Start Potty Training, and there are other books I may end up getting. I'm pretty sure I've had friends recommend The Diaper-Free Baby. Hobo Mama has an awesome post on EC, too, which discusses resources and products I never knew existed! I don't think Ivey would object to never (or rarely) being wet or messy. It would save us from a lot of laundry, too. I'll let you know how it works out.

Stay tuned for a related post about the techniques that did not work for us!
Posted by Jenny at 11:10 AM