Little, for a little while 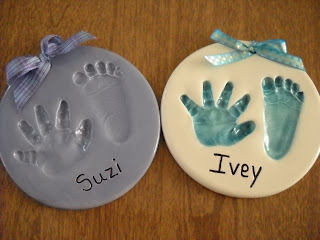 I wrote this on Tuesday the 29th and am just now getting around to posting it.

Today I went to my old workplace to visit my friends and to pick up Ivey's handprint and footprint. It felt strange to walk through that door and see how everything had changed in my absence. The Halloween decorations were up and all the displays were rearranged. Kelly and Vicky buzzed around doing neb setups and answering the phone as I just stood there with a baby in my arms and did nothing. I could've easily picked up the phone and said "thank you for calling AnMed Health Jennie G's, this is Jenny!" It feels weird, but I'm glad that chapter of my life is over.
I would have been back at work today if I hadn't quit. Ivey would have been staying with my mom and dad, and they would've had their hands full. I would have come home to a baby who'd had bottles instead of nursing sessions and had done several cute things while I was gone.
Instead, I took her to visit and when we were tired we went home. She nursed and then had her worst blowout poop ever. Out the diaper, into the pants, down the leg, yuck. She cried while I feebly attempted to undress her without making a mess and was so pleased when I put her in the sink for a warm bath.
Then my parents brought Suzi home (they had taken her to the library). While I was helping her in the bathroom, she told me "you're my best mama." Then she hugged my leg and told me she loved me. She is also telling her first knock-knock jokes... "Knock-knock, who's there? It's me, Suzi!" and "Knock-knock, who's there? It's Tigger, knocking on the door!" She tells the whole joke herself without waiting for a response and none of them make sense.
Even though I do miss my friends, it's not as bad as I thought to go without "adult interaction." It's not so bad having to drink cold coffee or none at all in the morning because I'm either nursing Ivey or running upstairs because Suzi's woken up. Suzi cries and then shouts Maaaamaaaa! at 7:30 and when I run in to tell her good morning, she smiles through the tears and hugs me.
Above are my sweet girls' prints. Suzi's hands and feet haven't been that size in a long time, and Ivey's are getting bigger before our eyes.
I'm glad to have them. I'm glad to be with them. I want more of them.
Posted by Jenny at 9:00 AM

So glad you're enjoying life at home with your girls =)