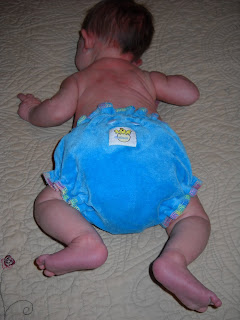 Cloth diapering a newborn... Not everything has worked the way we thought it would. Our plan was to go the cheap route until Ivey was big enough to wear the Bumgenius and Bumkins diapers we already had from Suzi's diaper days. We went here and got two Bummis Super Brites and a Prorap, along with a bunch of Indian prefolds and a two-pack of Snappis.
But...
1) Ivey kicked her little legs and screamed so much during changes that it was unpleasant to get a prefold situated with a Snappi and then put the cover on. Not to mention nearly impossible, especially in the dark at 3 am.
2) The prefolds were big and bulky. We had to fold them up in the back so they'd fit in the cover. The first time we got one on her, it looked so funny. I started to nurse her and as I held her on her side, her little legs stuck straight out, unable to touch due to the incredible bulk between them. It obviously wasn't comfortable, and before the cord stump fell off it was the worst!
3) It was a pain to get the cloth diaper all stuffed inside the cover. If you have any cloth hanging out of the cover you can have leaks.
4) Ivey pees. It's shocking sometimes to hold one of her wet diapers and feel how heavy it is! Suzi never peed so much! Unlike disposables with a gel core, cloth diapers have a limit of how much pee they can hold. When this limit is exceeded, even the best cloth diaper will leak. And our cloth diapers were not the best. We were changing them way more often than we wanted to, especially at night.
5) We sometimes placed pocket diaper inserts into the cover, and this worked, but we only had a few inserts that were small enough. When we ran out we were left with those too-bulky prefolds again.
6) I suspect we simply should have bought more. In those first few days, Ivey required so many changes during a time when we were least able to focus on laundry. I think it's a good idea to either buy one pack of disposables to tide you over between loads of laundry, have a friend or two over to help with chores, or buy enough newborn-appropriate cloth to last a day or so longer than you'd normally need.
This is how we succumbed to temptation so many times and put disposables on Ivey. The prefolds were clearly not for us, and I wished I'd invested in some fitted diapers like these or at least these. We just hadn't been prepared to spend so much. After a couple of weeks, I was sick of paying $10 for diapers again and again. I was even more sick of seeing dozens of disposable diapers being piled into our trash! What a waste!
1) I asked myself, what is the difference between my two-dollar prefold and the fitted I need? (A bunch of extra fabric.) I searched for ideas and found diapersewing.com. I decided to make a variation of the quick and easy fitted and the prefold to fitted. My mom helped me, and we started by using a newborn disposable to figure out where to trim the prefold. We cut it in on the sides and also took a couple of inches off the top. Instead of serging the edges, we used binding; I once made a quilt for Suzi and we had some left over. We put elastic inside the binding on the curves for the legs. In the end, we had one plain fitted diaper and one with tabs. We didn't bother with velcro because we had a Snappi. The altered diapers worked much, much better. The prefolds only cost us about $2 each, and even if we'd had to buy supplies they probably wouldn't have cost more than $10. 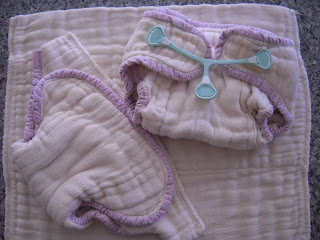 2) Now that Ivey has gotten a little bigger we have more options. When I was still pregnant I bought some gorgeous, soft bamboo diapers from Ellen, a mom I know from babywearing group. Her business is called Bleu River Bootie. They come in vivid colors and adjust to fit with snaps. My favorite thing about them is the sheer amount of pee they can hold. Ivey is a super soaker, and these haven't leaked on us yet--even without the extra soaker that snaps in when you need it. They are our favorite for nighttime and for daytime outings--anytime when we really, really don't want to deal with a leak. 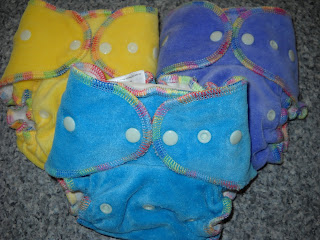 Since these diapers from Bleu River Bootie (we call them our "Ellen diapers") are not waterproof, we have to use a cover with them. We started with Green Earth covers, Proraps and Bummis Super Brites. I really wanted to love those pretty Bummis covers, but I was a little underwhelmed. The Green Earth covers, which came with the diapers from Ellen, were my favorite and the Proraps came in second--and both were much cheaper. We only had newborn-sized covers, so we recently had to order something bigger.
3) I did some shopping around and finally chose Thirsties Duo Wraps. These only come in two sizes to fit from newborn to toddler, and they snap to adjust. They also come in pretty colors, and they work! A problem we'd had previously was that the covers would leave marks on Ivey's thighs, but these covers are softer and stretchier and we haven't had an issue with it. We ordered two covers in size one, and they worked so well that I've already ordered our size twos. You don't need many because, assuming a blowout hasn't occurred, covers can be used several times before needing to be washed; you just need a fresh fitted diaper or insert. 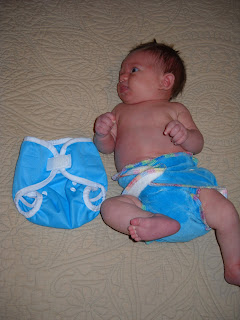 4) The other main thing we are using is Bumgenius one-sizes. An extraordinarily generous friend gave us a big bag of practically brand new diapers (most of which will be wonderful for when Ivey's a little bigger), and there were two of these in there. The elastic is shot in most of the older ones we had already, but the new ones are great. I am going to try to fix the elastic in the old ones, because they are in okay condition otherwise. These are wonderful but expensive, so unless there's an unbelievable sale, we won't be getting any more. 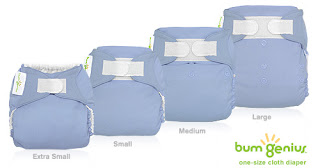 5) My favorite way to diaper right now for daytime (I think we got the idea from Julie at her cloth diapering Blessingway) is to use a Bumgenius one-size insert inside one of our Thirsties Duo Wraps. This is a lot easier to put on the baby than a prefold or a fitted that snaps. It still allows us to use the cover again most of the time, too. This is a cheap way to diaper! You can buy inserts brand new for about $3.50. If you're diapering a newborn, you could use one or two newborn inserts, which cost only $6 for a three-pack. This is probably what I'll stock up on whenever we have baby #3! (It'd also be nice to try inserts that are cut in ever so slightly between the legs, like these Kissaluvs Super-Soakers, but also short enough for a newborn without needing to be folded. Anyone know of some that fit that description?)
6) About our wipes... We don't have fancy ones like some people, as the store-bought kind are too expensive to tempt me and I haven't had time to make any. But I did learn how to layer our cut up scrap wipes in the container so they pop out conveniently like the store-bought disposable ones. We've been putting our wipes in a water/teeny bit of natural bar soap/couple drops of tea tree oil/squirt of olive oil solution. There's nothing wrong with plain old water, though, and that is what we use sometimes. I do want to make some pretty wipes for when we go out. I have a feeling it would be a simple and satisfying project.
So we've finally found our cloth diapering groove. I had big plans for using elimination communication, but we haven't gotten started with it yet. If you have, please tell me what your first step was and how it worked for you! Also, please share if you have any other ideas to make cloth diapering cheaper or easier (or preferably both).
Posted by Jenny at 9:30 PM

Hey girl! You stole my blog topic for tomorrow...lol! i've been meaning to write about it, but have been putting it off until i actually got a pic of lucy in her dipes. we kept lucy in 'sposies for the first three weeks, mainly because a.) i was too tired to want to deal with my cloth and b.) lucy was just too small. my stash consists of fuzzi bunz (the one size) and prefolds with bummis super brites and whisper wraps. i started out using the fuzzi bunz because they seemed easier, but guess what? by the time i snap 6 snaps (3 on each side), i can just as easily get a prefold on and snappied. so i've been loving my prefolds and wraps! brett even tried his hand at using the prefolds today and got it on the first try.
how big are your prefolds? we have the small size and they are fine- of course i'll have to buy bigger ones at some point, but i use them for some many other things that i don't mind. Oh, and thanks for the shout-out!

I had been wondering if you had any diapers small enough for Lucy! We bought Indian 4-8-4 (I think) prefolds, and they are supposed to be newborn size, the smallest they had at Littlest Birds where we bought them. I don't know what the problem was, but ours were aggravating. I really wanted Kissaluvs or something similar in a fitted, but it seemed like a waste of money if we were just going to be using our one-size diapers within a few weeks. Next time I'll be getting better ones, though. We hope to have a few more kids, so it's not like we won't get our money's worth out of them!